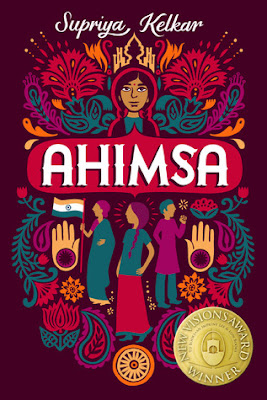 It’s 1942 and while Britain and the rest of the world are engaged in WWII, in Bombay (today’s Mumbai), the Quit India movement, whose goal is to rid India of British rule and gain independence, is begun with a speech by Mahatma Gandhi on August 8th. The very next day, August 9, 1942, Gandhi is arrested but it doesn’t stop many from still having faith in the Quit India movement.

Gandhi, a practitioner of Ahimsa, or civil disobedience, had already asked that one member of every family become a freedom fighter for Indian independence. Anjali Joshi, 10, a member of the high born Brahmin caste, knew that some of the kids in her class had family members who were freedom fighters, but after Gandhi's speech, she is more than surprised to learn that her mother has also joined the fight. And one of the things her mother is focused on is attempting to make the lives of those considered to be untouchable better (Gandhi referred to the untouchable caste as Harijan, meaning children of God, but Anjali learns they consider that an insult and would rather be referred to as Dalit, meaning oppressed).

At first, Anjali isn’t really too happy, especially when her mother makes her burn all of her beautiful foreign-made ghagra-cholis and replaces them with plainer khadi, a handwoven homespun cotton they spin themselves. She is particularly unhappy after her mother shows kindness towards the young Dalit boy, Mohan, who cleans their outhouse, causing him to run away, and then decides that Anjali and she will clean the outhouse themselves.

Slowly and reluctantly, however, Anjali begins to support her mother’s attempts at being an activist. They begin attending freedom movement meetings together, and after visiting the basti where the Dalits live and get to know the people better, Anjali decides that it is unfair that the young Dalits are not able to go to school, too. They begin teaching the children in the basti, even finding help from a surprising a very surprising source. Soon, Anjali and her mother are working to make it possible for the kids to actually attend the school that Anjali goes to, getting uniforms and tiffins all ready for them.

But the weekend before their first day of school, rioting breaks out between the Hindus and Muslims and schools are closed. Later, Anjali’s best friend, Irfaan, a Muslim boy who is more like a brother to her than a friend, accuses her of writing anti-Muslim words on his father’s store, ending their friendship, and worst of all, Anjali’s mother is arrested on charges of helping to instigate the riots. While in prison and still practicing Ahimsa, or non-violence, her mother goes on a hunger strike, and although Anjali is afraid for her, she decides to carry on their work, even as she realizes she herself must unlearn the prejudices and superstitions that were so much a part of her life.

Ahimsa is a debut novel for Supriya Kelkar, based on the experiences of her great-grandmother, who had joined Gandhi’s freedom movement so her husband could continue working, much the same way Anjali’s mother did.


I found Ahimsa to be a very interesting novel about social injustice in 1940s India that covers quite a lot of historical and political ground, some of which may not be familiar to young American readers. But, Kelkar has taken great pains to make this important period in Indian history accessible, although at times she waxes a little on the didactic side when it comes to describing the political situation.

But one of the things I did like is that Kelkar has included a lot of interesting, personal details in her narrative descriptions, including what daily life was like, the kinds of clothing people wore, food they ate, games kids played, holidays celebrated as well as accounts of the living conditions of someone in the Brahmin class, of the basti where the Dalits live, and even a bit about how the members of the British Raj (rulers) lived. These are the kinds of details that often work to bring a story to life, and Ahimsa is not different.

The other thing I liked is the Kelkar has written flawed characters who learn from their mistakes. Anjali's mother is an enthusiastic freedom fighter, so enthusiastic that she can't see better alternatives to her actions, and sometimes not listening to the very people she is trying to help. For instance, burning the family's clothing in protest, following Gandhi's example, rather than giving them to the poor who really could have used them. Even Anjali is flawed, at first not really understanding what her country is going through, but slowly she becoming more enlightened, though at times no less feisty and headstrong, which can and does get her into trouble. Even Gandhi and some of his ideas are presented as somewhat flawed, as Anjali discovers the more involved she becomes in the Freedom Movement.

Ahimsa is a very readable novel and a nice introduction to the Freedom Movement in India. It is also a novel about trying to make a difference, about social injustice, and about resistance, and although these themes are put into the context of Indian history, they will certainly resonate with today's young readers.

Be sure to read the Author's Note for a detailed overview of this period in Indian history and the leaders involved in it. Kelkar has also included a list of books for Further Reading and a very helpful glossary.

Although it's for slightly older readers, pair Ahimsa with Padma Venkatraman's Climbing the Stairs for another view of India's fight for independence.

You might find this interview published in The Washington Post with author Supriya Kelkar about Ahimsa interesting and informative.

I've read a number of books that are set in India or have Indian characters and often the kids in them play a game called Gilli Danda. If you've wondered, as I have, what the game is and how it is played, you may find a helpful article HERE
Posted by Alex at 11:36 AM