Flowers for Sarajevo by John McCutcheon, illustrated by Kristy Caldwell 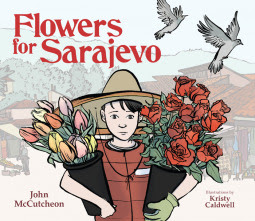 I can still remember watching the 1984 Winter Olympics held in Sarajevo, especially that stunning performance of Jayne Torvill and Christopher Dean ice skating to Bolero, for which they earned perfect scores down the line.

Yet, less than 10 years later, that once beautiful city was under siege by Serbs and Bosnian Serbs, a blockade that lasted from April 1992 to February 1996, with daily sniper shelling and mortar attacks.

Flowers for Sarajevo is based on a true story that came out of the siege. It is narrated by Drasko, a young (fictional) boy who works with his father, Milo, selling flowers in a bustling marketplace in Sarajevo, one where Serbs, Croats, Muslims, and Christians mingle and shop together. But overnight, Drasko observes, everything changes, Sarajevo is being torn apart, and men, even his father, are being sent to the battlefield to fight.

Suddenly, merchants who were once friendly when Milo was there, have become mean and are pushing Drasko aside, forcing him into the worst corner of the marketplace. One good thing about it, he says - he can hear the Sarajevo Opera Orchestra rehearsing.

Then, one day in May 1992, a mortar shells hit a bakery where 22 people who were waiting in line to buy bread are killed. The very next day, at the very moment the people were killed, a cellist comes out of the rehearsal hall, sits among the rubble that was once the bakery, and plays Albinoni’s Adagio in G Minor on his cello. He does this for 22 days days in a row, “one day for each family without a loved one,” Drasko tells us.

Flowers for Sarajevo is one of the most affecting books I have read for this blog so far. Perhaps it is because the author does not go into any real detail about the Balkan War itself, but lets the reader experience it through the eyes of a young boy who ethnicity isn’t given. What the reader focuses on instead is that small marketplace and the tragic event that took place there, and then, the meaning of the cellist’s daily performance.

Which is probably why McCutcheon doesn’t give the name of the cellist, or even the name of the piece that he plays everyday. Somehow, it seems fitting not knowing right away (you will find it, however, in the Author’s Note). In that way, it focuses only on honoring the dead and the families they left behind, not about who the cellist is.

In this beautifully done picture book for older readers, we are reminded that the language of music has the power to unite us, that courageous acts have the power to inspire us, and both have the power to give us hope.
The ink, charcoal, and graphite pencil illustrations are done in a palette of dark, somber shades, except for the brightly colored flowers that Milo and Drasko sell. And just as the story wants us to focus on Drasko and the cellist, so do the illustrations, often having them is sharp focus, and the streets and buildings that surround them in soft, almost transparent focus. The illustrations are all extremely dramatic even in their simplicity.

McCutcheon includes a short history of wars in the Balkans over the years, and more information about the cellist, whose name is Vedran Smailovic. There is also a CD of John McCutcheon narrating the story, as well as his song “Streets of Sarajevo,” and a performance of Albinoni’s Adagio in G Minor played by Vedran Smailovic, among other things.

You can find a Teacher’s Guide to Flowers for Sarajevo from the publisher, Peachtree Publishers HERE

And in June 1992, the NY Times published an interesting piece about Sarajevo and Vedran Smailovic. You can find it HERE

This book is recommended for readers age 7+
This book was purchased for my persona library
Posted by Alex at 10:53 AM