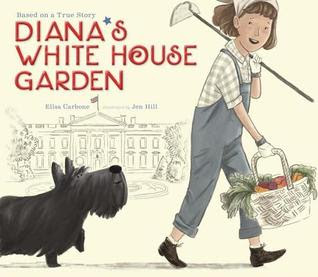 When the United States entered World War II, people of all ages on the home front were urged to do whatever they could to help the war effort. Naturally, Diana Hopkins, the ten-year-old  daughter of President Roosevelt's chief adviser Harry Hopkins and White House resident, wanted to help, too. But everything she tried, just didn't work out well in the White House.

So, when the President said that he wanted everyone to grow their own food as part of the war effort to keep both soldiers and citizens strong and healthy, that included the White House lawn. Diana jumps at the chance to help out with the President's proposed Victory Garden and before she knows it, she is sporting a pair of overalls, turning the soil, fertilizing it, and planting beans, carrots, cabbages, and tomato plants. Even Mrs. Roosevelt helps out on occasion.

With the help and guidance of Mrs. Roosevelt, George, the groundskeeper, and Fala, the President's little scotty dog whose job it was to keep the rabbits away, Diana's garden thrives. By harvest time, flouishing has a flourishing garden ready for picking and eating.

Diana’s garden was made famous when newspapers and magazines published pictures of her working in her garden, wearing her overalls, an inspiration to kids all over the country to follow her lead:


Diana’s White House Garden is a lovely picture book work of historical fiction for young readers that shows how kids can sometimes do things that can make a big difference. Without going into the specifics of World War II, the need and desire for a Victory Garden comes across in a very age appropriate way and the real emphasis is on helping out, perseverance (especially after rabbits eat her first sprouts) and the rewards to be reaped as a result, including the feeling of accomplishment.

The simple line pencil, gouache, and digital drawings done in a palette of earth tones on a cream background reflect not just the time period, but also the idea of working in the soil. Of course, Diana’s big, red tomatoes, lovely orange carrots, and deep green cabbages might inspire any to create their own Victory Garden, even today.

One bit of reality: President Roosevelt wasn't really very keen on a Victory Garden, it was Mrs. Roosevelt’s idea. It was only after he had seen and tasted the fruits of their labor that the President became enthusiastic. You can read all about it at City Farmer News. However, this by no means should diminish your enjoyment of Diana’s White House Garden.

This book is recommended for readers age 5+
This book was borrowed from the NYPL
Posted by Alex at 7:42 AM