Across the Blue Pacific by Louise Borden, illustrated by Robert Andrew Parker 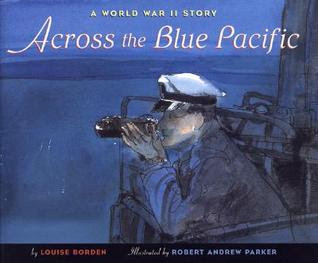 It's the winter of 1943, when Molly Crenshaw is in second grade and her next door neighbor, Ted Walker, finishes submarine training and comes home on leave. Molly and her younger brother Sam just want to hang around all day with their real-life hero, after all, who else could help them build a naval snowman or show them how to spit shine their Sunday-best shoes.

Then, in March Ted receives his orders and learns he is heading to the war in the Pacific on a submarine called the USS Albacore. Molly and Sam begin to write weekly letters to Ted, letters that always include a drawing of the Walker's dog, Buttons. During the summer, they hang around Mrs. Walker's porch, listening to the radio. When school begins again, Molly's third grade year just flies by.

In September, 1944, Molly's fourth grade teacher, Mrs. Linsay and a few students paint a world map on one the walls of the school, including every country and all the islands in the Pacific. The map helped Molly imagine where and what Ted might be up to on that small submarine in the so, so large Pacific Ocean.

Then, two days before Christmas, Molly and Sam notice a lot of black cars parked in Mrs. Walker's driveway. Ted's Uncle Will tells them the sad news that the USS Albacore never returned from its last patrol and now, Ted is MIA- Missing in Action.

The days immediately after receiving this news drag by, but eventually life, though now different, returns to a steadier routine. Suddenly, remembering everything about Ted becomes an important memory to keep. The war finally ends in August 1945, Molly begins fifth grade, but looking at the world map still on the school wall, she begins to think about all those soldiers on both sides of the war, ally and enemy, who didn't come home, just as Ted didn't, and how stories of those other lost loved ones are passed down, "in different ways and in different voices/from family to family,/and from neighbor to friend.../the stories/that are important enough to keep.

Across the Blue Pacific is basically a home front story, told from Molly's point of view, and looking back as a adult to those intense years when the war became a reality for her in the figure of Ted Walker. It is told in Borden's well-crafted, sensitive free-verse, a style she has mastered so that Molly's story never loses its sense of poignancy and thoughtful introspection.

Parker's ink and watercolor illustrations alternate between Molly's life at home and Ted life on the submarine, and are done in a subdued, loose-line style that distances the reader (along with Molly) from the war years, but also gives those years a real sense of unsteadiness.

Across the Blue Pacific is a story that has its roots in reality, as you will discover when you read Borden's Author's Note. The real Ted Walker was an uncle whom Borden never knew, an executive officer aboard the USS Albacore. Do read the Note if you want to find out what happened to the submarine, according to the US Navy.

Across the Blue Pacific is a picture book for older readers that deals with the impact of war, loss, and grief on the life of a young girl in elementary school, and the importance of memory to keep those lost alive in our thoughts.

This book is recommended for readers age 6+
This book was borrowed from the NYPL
Posted by Alex at 12:05 PM