Adrift at Sea: A Vietnam Boy's Story of Survival by Marsha Forchuk Skrypuch with Tuan Ho, art by Brian Deines 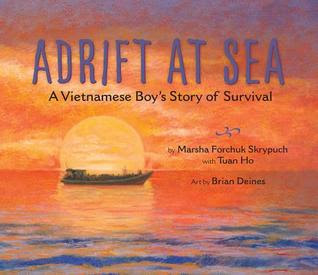 The plight of refugees have been in the news a lot these days because of the war in Syria. As more and more borders are closed to them, it might be a good time to remember another group of refugees who arrived on North America's shores and have contributed so much to their adopted country.

When the Vietnam War ended in 1975, and the communist government took over South Vietnam, daily life became so difficult and unbearable that families were willing to risk escaping their country in rickety boats not made for long sea voyages. But these boats were the only way out, unless you were rich.

In the Ho family, six year-old Tuan's father and older sister Linh were had escaped Vietnam in 1980 and made their way to Canada. Now, in 1981, it is Tuan's time to escape with this mother and two sisters, Lan, 9. and Loan, 10. His youngest sister Van, 4, would  have to be left behind for now. She is just too young for the trip. No one, not even the neighbors must know what Tuan and his family are up one dark night as they sneak out of the house.

Their journey to freedom begins after a truck drops them off close to the water's edge. Running for their lives, dodging soldiers and their gun fire, they are picked up in a skiff. Still dodging bullets, the overcrowded skiff takes them to a fishing boats further out in the sea.

It is hot and humid and there isn't much drinking water. When the boat springs a leak, Tuan's mother and aunt help bail out the water as quickly as they can. On the third day, the boat's engine dies and the refugees find themselves adrift on the huge and unpredictable Pacific Ocean. One day six, an American aircraft carrier is spotted and the refugees are welcomed aboard.

The Ho family, we learn, survives they harrowing ordeal, and are reunited with Tuan's father and sister in Canada. And yes, Van and her grandmother both arrive in Canada in 1985, safe and sound.

Adrift at Sea is told from Tuan's point of view, and aimed at readers about the same age as he was when he escaped Vietnam. Such a young narrator may not capture the truly difficult and risky trip in the kind of detail a book for older readers might, but he still very clearly depicts the fear, the hot sun, lack of water, and relief at being rescued at an age appropriate level that any young reader will be able understand.

Skrypuch has included a number photos of the Ho family, both in Vietnam and in Canada. She has also included a brief history of the "boat people" as the refugees came to be called. The refugees faced not only the kinds of problems that the Ho family dealt with, but there were storms, pirates and always the threat of dying of thirst and hunger, and sometimes, they found that they were not welcomed everywhere.

Using a color palette mainly of oranges, yellows and blues, Deines's highly textured oil on canvas illustrations capture all the secrecy, fear, and perils, all wrapped up in the dangerously hazy, hot, and humid weather that these refugees faced in their desire for freedom and a better life.

Adrift at Sea is a powerful historical nonfiction story that can certainly help shed light on events of the past that share a similarity to those that are happening in the world today.

This book is recommended for readers age 6+
This book was sent to me by the publisher, Pajama Press
Posted by Alex at 7:35 AM