The Mitchells: Five for Victory by Hilda van Stockum 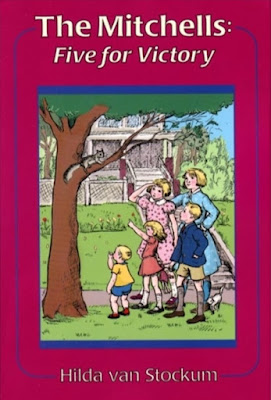 It is July, 1943 and John Mitchell, father of the five Mitchell children and an electrical engineer, has just left from Union Station in Washington, D.C. to join his ship.

Back home, the three older Mitchell children, Joan, 10 1/2, Patsy, 8, Peter, 6, along with two friends decide to form the Five for Victory Club to help with the war effort. The purpose of the club is to help people who need it, to collect scrap and bottles, to help in their mother's victory garden, and even to do some babysitting. Anything they earn pays for stamp to paste in their V for Victory Bond book and eventually to exchange that for a bond. And the children believe they have found the perfect place to hold their club meetings - a small playhouse in the yard of an empty house they call the 'white elephant.'

No sooner do they get the playhouse all set up, however, than a mother, Mrs. Trotter, and her son, Henry, 12 and a bully, move in the house, and the first thing Henry does is kick them out of the playhouse.

Meanwhile, their mother, Rita Mitchell, has decided to rent a room for some extra income. The first woman, Mrs. Merryvale, to move in doesn't last long. She may have written a book about how to discipline children, but in fact, she doesn't really seem to like them very much and the Mitchells are way to unruly for her. Her leaving, however, is based on a complete misunderstanding which is because of a very funny misunderstanding.

The next boarder is a businessman named Mr. Spencer. Mr. Spencer believes he has lost his daughter, son-in-law and granddaughter in the bombing of Rotterdam (Holland) in 1940, although he never had any official word about that. Luckily, he really likes the Mitchell children, especially Angela, age 3.

And it turns out that Mrs. Trotter has a young refugee girl named Una, who is about 8 years old, living with her beside her son Henry. Henry doesn't much care for Una and delights in tormenting her whenever he can. When the Mitchel children discover Una, they all become instant friends.

There is one other subplot concerning Lieutenant Mitchell's admonishing to his family NOT to get a pet while he is away. Well, you can certainly guess what happens there.

The Mitchells: Five for Victory was written in 1945 as the war was coming to an end.  In the novel, Hilda van Stockum has created a charming look at everyday life on the home front and peopled it with an endearing, lively family. The book takes place over the course of one year and there are three generations living under one roof, Grannie (and Mr. Spencer), mother and the five children, so you know that there are lots of antics as well as ups and downs.

We hear a lot about refugees these days, and I think the story of Una will resonate with today's young readers. Van Stockum has really captured the trauma of a child who has lost her family in the war, and who was shuffled from country to country by people whose language she didn't understand, until she reached the United States, to be fostered by Mrs. Trotter. One particularly poignant scene takes place in a movie theater, where Una is left alone to watch a film while Mrs. Trotter and Henry shop for clothes for him. The movie she's left at is Journey for Margaret, a film about a young girl who has been traumatized by the Blitz. Judging by Una's reaction to the movie, it is clear that van Stockum had a very good understanding of how she felt.

Today's readers may find it odd that the children have so much freedom, but that was how it was back in those days. They may also find a few things a little outdated, like the children calling an escalator the moving stairs, but none of that detracts from the novel, in fact it really serves to give it a feeling a authenticity and charm. And yes, I find the van Stockum is a master at giving each of her characters just enough quirky characteristics to make them interesting, but still believable.

The Mitchells: Five for Victory is the second WWII novel by Hilda van Stockum I've read (The Winged Watchman was the first) and I have to say, they are as different from each other as possible and yet both are really interesting stories. I understand there is a third one called The Borrowed House that takes place in van Stockum's homeland, Holland, that I would like to read.

Should you fall in love with the Mitchell family as I did, you will be happy to know that their adventures continue in two more books that take place after the war is over. They are Canadian Summer and Friendly Gables.