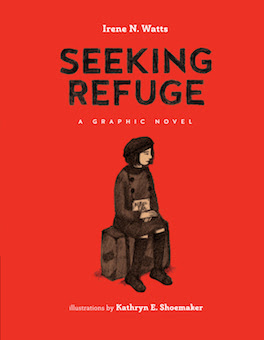 Back in 2014, I read and reviewed a trilogy by Irene N. Watts called Escape from Berlin. The first book, Good-bye, Marianne, tells the story of Marianne Kohn, 11, a young Jewish girl living in Berlin, with her mother. Her father has been missing since before Kristallnacht and her mother is working in an orphanage. It was through her work there that Marianne was able to secure a last minute place on the Kindertransport.

Seeking Refuge is the graphic form of the second book in the trilogy, which is called Remember Me, and picks up where Good-bye, Marianne leaves off.  Marianne has just arrived in London, where she is sent to live with the very wealthy and very snobbish Mr. and Mrs. Abercrombie Jones. Mrs. Abercrombie Jones immediately changes her name to Marianne* to Mary Ann, gives her a small room in the servants quarters and has her helping out around the house. Luckily, Marianne is allowed to go to school where she makes a friend named Bridget O'Malley. But when the two girls come up with a plan to find a someone who will sponsor Marianne's mother so she can also leave Germany for England, Mrs. Abercrombie Jones finds out and puts a stop to it, angry that she has been humiliated in front of her friends. Once the war begins, however, Marianne is evacuated out of London with the rest of her school and away from the Mrs. Abercrombie Jones.

From London, Marianne finds herself in Wales, but has a hard time finding a family that wants her. Finally, she finds herself in the home of a couple who have recently lost their daughter and expect Marianne to take her place - almost literally. When that doesn't work out, she is taken to another place, where she is met with a wonderful surprise.

I am a big fan of graphic novels. They are very appealing to reluctant readers and can be used in classrooms to supplement social studies classes. They are fast to read and don't require the kind of time as would a novel. Of course, that means that the graphic novel has to be done well, since it must convey the same information as a novel using a combination of words and illustration.

For that reason, I was very apprehensive about recommending Seeking Refuge at first. Even though I had read the novel, I was a little lost. I think I was a little put off by the fact that the illustrations are done in shades of gray and white, and that there is absolutely no other colors throughout. Ironically, for years whenever I thought about Nazi Germany and WWII, I thought about it in shades of gray. as though the sun never shone throughout the war and the Holocaust. Yet, the more I thought about what I was reading, the more I realized that here was a graphic novel that had actually succeeded in getting the story across and that the illustrations were perfect for the subject matter.

Both Watts and Shoemaker have created a story that really manages to convey the fear, the tension, the unease of a refugee arriving in a country where she is not really welcomed by everyone, and even looked down on by some. No one takes into consideration how a 11 year old girl might feel having just left her family behind in a dangerous place, never knowing if she will see them again, knowing no one in the foreign country that she was sent to for safety and not really understanding the language that well. It's pretty daunting, when you think about it. And hopefully, this is a book that will get young readers thinking, particularly in a time when we are seeing refugees seeking a safe place only to have the welcome mat pulled out from under them.

I did discover that an earlier graphic novel was published some years ago that tells the first story in the Escape from Berlin trilogy called Goodbye, Marianne which I know is still available but I haven't read it yet. I did think that Seeking Refuge stands on its own, but I would like to read the first graphic novel someday.

*In German, the final e has a soft uh sound, as in Emma