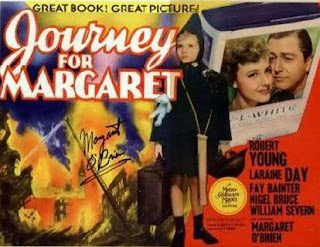 Based on a 1941 novel by William Lindsay White, Journey for Margaret tells the story of American journalist John Davies and his wife Nora, a very happy, in-love couple.  They have just arrived in London from France in 1940 and the Davies' are expecting their first baby.

John wants Nora to return to the US, but she wants to stay by his side, despite the Blitz.  But after a bomb hits the hotel she is in, Nora loses the baby and the doctor tells John she is no longer able to have children.

Nora leaves the hospital a bitter, detached woman and leaves for the US a few days later.  John remains in London to report on the blitz, but the quality of his reporting has decidedly lost its edge.  One night during an air raid, John witnesses a mother carrying her dead daughter, believing she is only asleep and later helps rescuers pull a three year old boy out of the rubble, during which he absently pockets the boy's toy lamb.  John Davies get mad and gets his journalistic edge back.

His next assignment is a home for children orphaned by the Blitz.  There he runs into the little boy he helped save.  The boy, whose name is Peter, immediately attaches himself to John and "adopts" him after John returns his lamb.

Before John leaves the home, a little girl is brought by a woman who had adopted her after her parents were killed by bombs.  The little girl, Margaret, was too hard to handle.  For one thing, she carries the shell casing of a magnesium bomb around her neck, and she constantly is wiping her eyes.  Why? Watch the clip -


Margaret also attaches herself to and "adopts" John Davies, setting up a very funny sibling rivalry between Peter and herself.  This turns to sad poignancy, however, when John takes them for a visit to meet people who are willing to adopt them and he must enter and exit the house with both children clinging to his legs.

It isn't long before John decides to adopt them and return to the US.  When his wife receives his letter about this plan, she has a bit of a breakdown but emerges from it her old self, happily agreeing to the adoption.

But of course, there is a SNAFU - the plane they are planning to take is completely booked.  John convinces the airline to permit him to use his baggage allowance for the kids, but they are over the weight limit.  So it is decided he will take Margaret, and Peter, who regresses to his old shell-shocked behavior, is sent to live with the people he had visited earlier.

Can John manage to finally get Peter on the plane?

This movie, while at time overly sentimental, is actually a pretty good film.  It depicts the way people dealt with the Blitz - guests bedding down in the hotel shelter or in its one save corridor, the loss of a child or parent(s), and of course the fires, the rubble of everyday life and the people who worked though these conditions even as the bombs continued to fall to save lives..   But the film's most redeeming quality is the picture it paints of the effect the war had on young children - the fear of the sky causing children to walk around always looking up, or the little girl who screams reliving what happened to her.  In the 1942 movie review of Journey for Margaret, the critic wrote "As Director Van Dyke and his authors have made a film of childhood as if they knew that all the heartbreak lay in childhood's...inability to speak and tell its wounds."

Journey for Margaret is rated 4 hankerchiefs.

Journey for Margaret is sometimes shown TMC, and can be rented from various online sources, but I borrowed it through interlibrary loan.