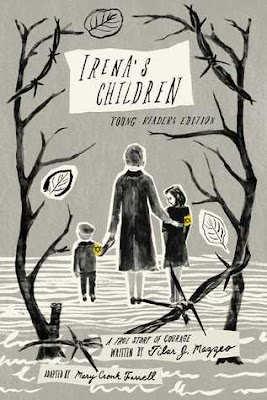 It probably wasn't until 2009 when Anna Pacquin played the title role in the 2009 Hallmark Hall of Fame TV movie The Courageous Heart of Irena Sendler that most of us learned about what she had done during WWII.  Since then, a few excellent picture books have also come out about this brave young woman, notably Irena Sendler and the Children of the Warsaw Ghetto by Susan Goldman Rubin, Irena's Jars of Secrets by Marcia Vaughan and Jars of Hope: How One Woman Helped Save 2,500 Children During the Holocaust by Jennifer Roy.  These are all very well-done, and a wonderful way to introduce younger readers to what Irena Sendler accomplished right under the noses of the Nazis occupying her city, Warsaw, Poland, during World War II.

Now, however, a book has come out that goes even deeper into the work of Irena Sendler and the Polish Resistance. Originally written for adults, Irena's Children has been adapted for young readers who are beyond the picture book age.

Growing up in a religious Catholic home in Otwock, Poland, Irena saw that her father, a doctor and her hero, would always treat the Jewish families when no one else was willing to, and had also welcomed Jews as friends into their home, again when no one else would.  Irena had played with the Jewish children growing up near her home, and had even learned to speak Yiddish by age six.  In Warsaw, Irena went to social work school, always thinking of her deceased father as her inspiration because of the kindness he shown to all his patients.  At the Free University, Irena's mentor and teacher had been Dr. Helena Radlikska, who taught her that "the commitment of a small group of well-intentioned people could shape the world in their vision of it." (pg 19)

Small wonder that when the German Luftwaffe began its unrelenting bombing of Warsaw in September 1939, destroying most of its building, it didn't take Irena long to spring into action. She began by finding food for soup kitchens, and delivering money to friends and teachers who were forced to go underground because of the Nazi occupation of Poland.

In 1940, Warsaw's Jews were first forced to build and then to live in a crowded ghetto.  As it became more and more crowded, people began to stave and fall ill. Irena, because of her training, received permission to enter the ghetto as a public health specialist, bringing whatever food and medicine she could manage to sneak in.  Soon, however, Irena found herself going from family to family asking them to let her smuggle their children out of the ghetto to safe places away from Warsaw.  Hiding children however she could, in coffins, in carpenter's tool boxes, even wading through sewers, among other things, Irena worked hard to save as many of Poland's Jewish children as she could, even as she risked her own life on a daily basis to do it.  All the while, Irena kept lists of the children and where they were placed so that they could be reunited with family after the war, list that were eventually buried under an apple tree in a friend's garden.  Altogether, Irena saved around 2,500 children.  She herself was arrested and, after being tortured, sentenced to be executed, only to be saved at the last minute.

I've always thought of Irena Sendler as a real hero, even though she didn't consider herself to be one.  And of course, I knew there was much more to her story than what I found in the picture books about her. The Young Readers Edition of Irena's Children is an ideal age appropriate book for going deeper into what happened in Poland during World War II and for understanding exactly what Irena Sendler faced when she decided to become part of the resistance and not turn her back on friends and strangers. Mazzeo has clearly done a lot of research for this historical work about Sendler and even continues it, with information about some of the friends and children that Irena was involved with during the war and who survived it. Sendler's biography is well sourced with extensive Endnotes and there are copious photographs of many of the people with whom Irena surrounded herself with.

Sometimes, when an young readers edition is adapted from the adult book it can get a little confusing in places, but I found that Irena's Children, adapted by Mary Cronk Farrell, flows smoothly, with none of the jolts that sometimes causes the reader to become confused and/or lost in the details. Farrell is not stranger to WWII nonfiction.  You may recall that she wrote a book a few years ago called True Grit: How American World War II Nurses Survived Battle and Prison Camp in the Pacific and is very comfortable working with this kind of information.

Irena's Children: A True Story of Courage is a gripping, tension filled work that is all the more poignant because of is true. I highly recommended this work not only for anyone interested in WWII, but for everyone else.

There is a reading guide available on the publisher's website that is for the adult book but can easily be adapted for this Young Readers Edition.  You can find it HERE

This book is recommended for readers age 10+
This book was an EARC received from NetGalley
Posted by Alex at 3:08 PM