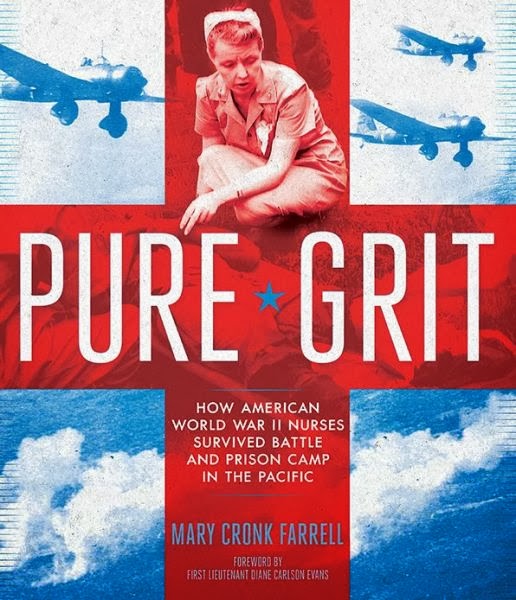 We all know about the surprise attack on Pearl Harbor on December 7, 1941, "a date that will live in infamy."  But how many know that only 9 hours later, the Japanese launched an attack on American bases in the Philippines?  The fact is that most of us don't really know as much about the Pacific front as we do the European front.

Likewise, most of us don't know that when American forces were forced to surrender and the troops who had not been killed were taken prisoner, among the POWs were approximately 100 military nurses, both Army and Naval.

Mary Cronk Farrell's Pure Grit is the story of how those nurses not only survived, but also how they continued to care for the sick and wounded with dwindling medical supplies and food.  When the women had first come to the Philippines, their workload in the base hospitals was light, only 4 hours a day because of the heat and humidity, and their spare time was filled with dancing, golfing, tennis, swimming and even a little romance for some.  Living a resort-like life, no one was expecting the war to come their way.  As one nurse, Peggy Nash, said: "I had no idea there was going to be a war...That's how naive I was." (pg 16)

When US troops retreated to Bataan, 25 nurses were sent there to care for the wounded, but they first had to set up a makeshift hospital.  In no time, the wards were overflowing.  From January 1941 until their liberation in 1945, these brave nurses continued to care for the sick and wounded under continuously deteriorating conditions, practicing what Farrell calls "Make-Do Medicine" (Chapter 6)

Over the course of those three years, the nurses lost weight because of the starvation-level rations they were given. some developed beriberi, others dengue fever and/or bouts of malaria and tuberculosis.  Even after they returned to the US, many suffered from untreated Post Traumatic Stress Disorder, untreated because Farrell writes,  understanding of PTSD was two wars and generations away.

And sadly, it wasn't until most of the nurses had passed away that any real recognition of they had experienced and the nearly miraculous care they gave to their patients under such terrible conditions was acknowledged.

Pure Grit is a well researched and very readable history of these courageous women.  Some of their individual stories are sandwiched into the narrative of what happened in the Philippines, giving it all a very intimate feeling.  That feeling is enhanced by all the private photos, newspaper clippings, diaries, and other primary source documents Farrell included to round out the lives of those admirable nurses who served so bravely.

Besides a history of the survival of the nurses held POW by the Japanese, there is also a useful glossary, a list of all the nurses serving when the Japanese invaded, a select timeline pertaining mostly to the events affecting the Philippines, extensive Endnotes, a nice bibliography, and websites where the curious can find more information.

War books are not always easy to read, but Pure Grit is an exception to the rule and a wonderful addition to any Women's History library.  And it will be available just in time for Women's History Month which is in March.

Full Disclosure:  I have a soft spot in my heart for women who became nurses during WWII - which is exactly what my mom did.

Pure Grit: How American World War II Nurses Survived Battle and Prison Camp in the Pacific will be released February 25, 2014.

Why not take a moment to view the book trailer:

Email ThisBlogThis!Share to TwitterShare to FacebookShare to Pinterest
Labels: Nurses, Philippines, PTSD, YA