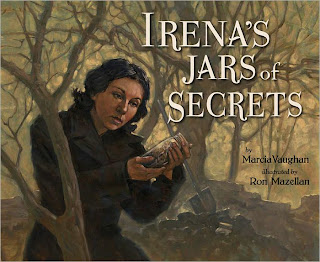 Marcia Vaughan's book, Irena's Jars of Secrets, is an informative look at the life of a brave, young resistance worker in the face of great danger.

Irena Sendler was a pretty young girl living in Warsaw, Poland when the Nazis invaded her country. Late in 1940, they forced Warsaw’s more than 400,000 Jews into some crowded, run down buildings, separated from the rest of that city by a 7 foot brick wall the Nazis had built, where they began their fight for survival in the Warsaw Ghetto.

Irena Sendler, a young social worker, and the daughter of a physician who had been willing to treat poor Jews during a Typhus outbreak years earlier, decided to follow in her father's footsteps and try to help ease the suffering of the Jews behind the wall.

Against this background, Vaughan tells the story of this remarkable young woman who risked her own life over and over to try to save others. By now, most of us know about Irena smuggling activities – bringing clothing, food and medical supplies into the ghetto, and sneaking children out and to safety. To keep track of the children, whose names had to be changed so they could pass as Christians, she wrote down their real name and their false identity and buried them in jars in the hope that they could some day be reunited with their families.

Irena’s smuggling activities came to an end when she was betrayed to the Gestapo in 1943. She was sentenced to death but, despite being tortured, never betrayed any her secrets, including the location of the jars that had the potential to destroy so many lives in the hands of the Nazis.

Vaughan’s biography about Irena Sendler is presented in very accessible language, detailing how she began her work on her own, and later joining Zegota, a secret organization for helping Jews. She also includes some personalized narratives of Jews deciding to send their child into the unknown with Irena, rather than face deportation. Vaughan gives a real sense of the despair, desperation and even the ambivalence these parents must have felt about turning their children over to Irena without a real guarantee of their safety.

The narrative is enhanced by the excellent oil paintings of illustrator Ron Mazellan throughout the book. Mazellan paintings reflect the dark uncertain times that people experienced under the Nazis. Yet, for all their emotional content, the paintings are done in a kind of soft focus, powerful without being frightening and detracting from the narrative.

Irena’s Jars of Secrets is an excellent addition to the ever growing body of Holocaust literature for younger readers. I think it is important that children know there were some people acting unselfishly and courageously amid so much cruelty. This important story is a must read for anyone teaching or just interested in the Holocaust.

This book is recommended for readers age 6-11
This book was a received as an E-ARC from Netgalley.com

Irena Sendler's obituary from the New York Times
(I had a teacher in junior high who told us to always read the obits in the newspaper because you can learn so much about a person there and it has really been true, which is why I sometimes include them)