Salt to the Sea by Ruta Sepetys 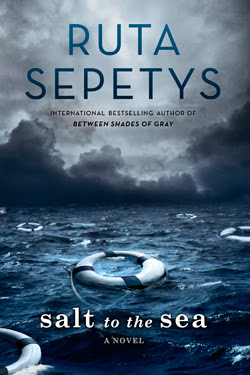 It's 1945, Germany is losing the war it had began in 1939, and now, as the Red Army approaches the East Prussian countryside, thousands of people who can are fleeing to escape the brutality that the Russians have been inflicting on Germans everywhere they go.

Among the refugees trying to reach the seaport city of Gotenhafen, where they hope to board a ship that will evacuate them out of the path of the Russians, are three young people whose paths converge en route.  There is Joana, 21, a Lithuanian nurse who believes she is a murderer; Florian, a Prussian carrying questionable orders from a top Nazi official; and Emilia, 15, a traumatized young Polish girl wearing a pink hat.  Also traveling with them are an elderly shoemaker, one little boy who has just witnessed his grandmother's death, a blind girl named Ingrid and Eva, a large older woman.  A fourth young narrator, Alfred, is a Nazi sailor assigned to the ship MV Wilhelm Gustloff docked in Gotenhafen.

The novel is told in first person alternating points of view by Joana, Florian, Emilia and Alfred.  Each one has a history and a secret that slowly unfolds through their narration.  Florian is a talented artist who was mentored as a restoration artist by a Nazi, Dr. Lange, at a museum in Königsburg under Prussian Gauleiter Erich Koch supposedly for the purpose of restoring and saving Europe's greatest art treasures.  Now, feeling disillusioned and betrayed by his mentor, he is carrying information about what may have been the Nazi's greatest art plunder, information that the Nazis definitely do not want made public.

Because of her Aryan looks, Joana was repatriated to Germany as a Volksdeutsche (one with German ancestry).  Now, however, even as she works to save lives with her nursing experience, she is racked by guilt regarding a choice she made in 1941, a choice that separated her from her family and their fate in her homeland of Lithuania.

Emilia is the youngest, the most vulnerable and the most traumatized of the four narrators and has already run into the advancing Red Army twice, narrowly escaping with her life.  She no long has a homeland and a family, and to make matters worse, she is traveling without any identification papers, and guarding her secret with her life - literally.

Alfred, a lowly sailor, obsessively writes love letters in his head to a girl back home describing the importance of his work in the German Navy in general and on the MV Wilhelm Gustloff, in particular. Right from the start, Alfred is a smarmy, untrustworthy character, whose shameful secret involves his behavior towards the girl back home.

Salt to the Sea is a character-driven story about a little known maritime tragedy that resulted in the loss of over 9,000 lives, and about 5,000 of them were children.  Each character moves the story forward even as they take the reader back to their past.  I found this to be a compelling novel, even though it lacks a traditional plot.  But I think the structure that Ruta Sepetys uses makes this a more exciting novel, and the way it is structured lets the reader learns everything they need to know straight from the narratives of the four main characters.

The scenes each narrator provides are emotionally harrowing in their detailed descriptions of fleeing refugees and the chaotic aftermath of the torpedoing of a ship.  Just as she did in Between Shades of Grey (my review), Sepetys doesn't spare the reader uncomfortable truths any more than she does her characters when it comes to the horrors of war, but she also reminders us that there are still good, caring people who will never lose their humanity.

Do pay attention to the maps at the beginning and end of the novel to get your bearings of where the refugees traveled from and to.  There is lots of great back matter, including an Author's Note and information about the resources and sources Sepetys used.  This is the kind of information that adds so much the a novel and why characters like the ones drawn here are so realistic and believable.

Although I wasn't too crazy about the very end of the novel, this is still one of the best novels I read this year, and I've a lot of good ones so far.  I particularly loved the way each person introduces themselves to the reader: Joana tells us: Guilt is a hunter; Emilia says: Shame is a hunter; Florian begins: Fate is a hunter; and Alfred: Fear is a hunter.  Right off the bat our curiosity is peaked by knowing these are conflicted characters who feel hunted, the question is why.  And the answers combined with the historical setting make this a truly riveting novel.

A useful Discussion Guide has been made available for download by the publisher, Penguin Books

This book is recommended for readers age 12+
This book was an ARC from the publisher
Posted by Alex at 9:57 AM