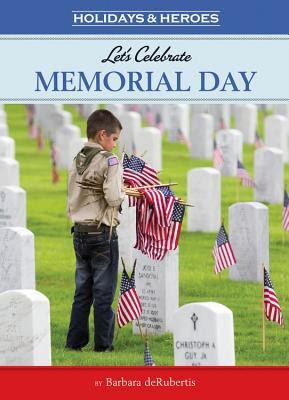 Did you know that Memorial Day was originally called Decoration Day?  During the Civil War, people began to decorate the graves of fallen soldiers with flowers and flags to honor them and their service.  The tradition continues after the Civil War ended and the day eventually became Memorial Day.

I have to be honest and say I didn't know that Memorial Day began with the Civil War.  I did know that when it became Memorial Day, it also became a day to honor those fallen soldiers of all of the wars the United States has been involved in - from the Revolutionary War to our present day conflicts, but apparently I still had things to learn.

Like me, kids probably know the true meaning of Memorial Day from school, especially since it means a day off for lots of them, and the official start of summer, with swimming, picnics, barbecues and getting together with friends and family.  And that's all good.

But if you would like your kids to know and appreciate the day more, then Let's Celebrate Memorial Day by Barbara deRobertis is an excellent place to begin.  This slender book covers not just the history of Memorial Day, but explains traditions associated with it, such as why poppies are associated with it and different kinds of celebrations.

There is a section on war memorials around the country, although most are in Washington DC and if you have''t visited yet, prepare for an emotional but rewarding experience and bring tissues.  There is also a section on different kinds of observances around the country, many of which have sadly been cancelled this year due to poor weather conditions.  And the book acknowledges the veterans, boy and girl scouts around the country that decorate the graves of every single soldier buried in a national cemetery, so no soldier goes unrecognized on Memorial Day.  And last but not least, the book reminds us that "Freedom is never free."

There are lots of photos throughout the book, large print for beginning readers, and easy to understand text.  All in all, Let's Celebrate Memorial Day is an excellent book for learning about Memorial Day, for anyone who doesn't know or needs a little refresher.

Oh yes, and it reminds us to take a moment at 3:00 PM to stop what we are doing and remember our fallen heroes, and thank those presently serving in our Armed Forces.

This book is recommended for readers age 6+
This book was sent to me by the publisher.