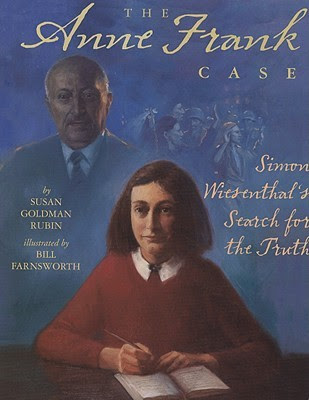 I am familiar with Anne Frank and also with Simon Wiesenthal, but I had no idea that Wiesenthal had spent years tracking down the Gestapo officer who arrested Anne and all the other people who had been hiding from the Nazis on the upper floors of her father's business for over 2 years.  It is a fascinating story.

After having survived time in a Polish ghetto, several Nazi concentration camps and a forced march, in part because of his artistic skill was needed by the Gestapo, Simon Wiesenthal felt compelled to hunt down the Nazis responsible for the cruel and deadly treatment of Europe's Jews.  It quickly became his life's work, at which he was quite successful.

Then, one night in 1958, Wiesenthal was asked to come to the Landes Theater in Linz, Austria.  A performance of The Diary of Anne Frank had been interrupted by some local teenager who claimed that Anne Frank had never existed, that her diary was a forgery, just made up to get more restitution money.

Wiesenthal's challenge to these teens - if he could find the Gestapo officer who had arrested Anne and the others in the attic fourteen years ago, would that convince them that she had indeed existed and that her story was true? Little did he know that it would take him five years to find a man who was living a mere10 minute walk from Wiesenthal's office.

The Anne Frank Case is a fascinating look at the life and work of Simon Wiesenthal, and how he tracked down Nazi criminals.  Wiesenthal had a photographic memory, which helped him remember many of the names of Nazi officers involved in the Holocaust, plus excellent investigative skills.  Yet, finding the arresting officer of the Franks was a long and arduous process.  He frequently interviewed people from the Netherlands, including the people who were hiding the Franks, and luckily, one remembered being questioned by someone named Silvernagel.  Having a place to start, Wiesenthal began searching telephone books, looking for variations of that name.  But everywhere he looked led to a dead end. He thought about asking Otto Frank, but decided not to, afraid he would ask Wiesenthal to stop the search.

By the time Wiesenthal found the person he was looking for, there was just not enough evidence to prove Karl Silberbauer was guilty of the arrest despite his admission that he had done it, and so he was never brought to trial,  And ironically, Otto Frank did know his name and the reason he didn't help will just knock your socks off.  I know it did mine.

The hunt for Anne Frank's arresting Gestapo officer is not a something I was aware of before, so I found this to be doubly informative book - an excellent introduction to Simon Wiesenthal's life as well as his investigations.  Altogether, he brought more than 1,100 criminals to justice.

Bill Farnsworth's full page realistic paintings are done in haunting dark hues, adding to the somberness of the subject.

There is a more detail biography about Wiesenthal in the back matter, complete with photographs, as well as additional resources and a glossary.

The Anne Frank Case is a picture book for older readers that will certainly appeal to anyone interested in the Holocaust and Anne Frank.  It is also an excellent addition to books used for introducing the Holocaust in the classroom or home school setting.

A Teaching Guide is available from the publisher, Holiday House.

This book is recommended for readers age 8+
This book was borrowed from the NYPL
Posted by Alex at 12:03 PM