The last book I reviewed here, The Liberators,  was a novel about two friends who joined the Marines and serves in the Pacific theater.  Our Hero, the Ira Hayes Story is about a man who really did serve in those sames places - Vella LaVella, Bourgainville, and who ultimately became one of the heroes who raised the flag at Iwo Jima.

Ira Hayes was a Pima Indian, born on the Gila River Indian Reservation in a remote part of the northern Sonoran Desert in Arizona in 1923.  His family were poor farmer, working the land, but living without electricity or running water.  They had four sons, and Ira was the oldest.  He was quiet and shy, but always felt lonely and seemed to fit in with the other kids on the reservation or in the Phoenix Indian School when he was sent there.

But, while still in his teens, the Japanese attacked Pearl Harbor and the United States went to war.  Ira felt it was his patriotic duty as an American to fight for his country and he joined the Marine Corps in August 1942 at age 19.  Sent to basic training in San Diego, Ira didn't experience the kind of segregation and low level jobs reserved for the African American soldiers because many believed that Native Americans were fierce warriors and so they trained with the white soldiers.

After basic training, Ira volunteered to train as a Paramarine.  Joining the military and going through such rigorous training seems for forge strong bonds of friendship among the soldiers, and it was in the Marines that Ira finally felt like he belonged.  Ira and his fellow Marines arrived in the Pacific theater in March 1943 and fought there for two years.  After the month long battle at Iwo Jima, Ira was one of six Marines who raised the flag over Mount Surabachi, a moment captured in a photograph by AP photographer Joe Rosenthal:

Ira came home a true Native American hero, but civilian life wasn't easy for him.  Most of his buddies didn't survive the war and Ira found it difficult to be celebrated knowing the terrible price his buddies had paid.  And once again, Ira felt like an outside, not fitting in anywhere.  Ira became severely depressed, and started drinking heavily.  In 1955, at the age of 32, Ira Hayes passed away.  He is buried in Arlington National Cemetery.

S. D. Nelson has written a very moving and insightful picture book for older readers about a real hero, showing us that even heroes aren't perfect.  He could have easily written the Ira Hayes story up to the flag raising at Iwo Jima, and left it at that, but instead he chose to continue and let his readers see that heroes are human and sometimes flawed.  Ira Hayes may have officially died of alcoholism, but I would say the loneliness, despair and depression were the real causes of his death.

Hayes' wartime experiences make up the majority of this book, but Nelson doesn't ignore his youth on the reservation and his time at the Indian School, giving us a clear picture of this very sensitive, isolated Pima Indian growing up in poverty, but surrounded by a loving family: 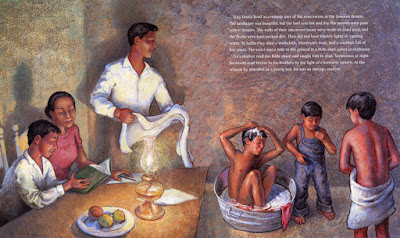 As you can see from the illustration above, Nelson's text is accompanied and complimented by his beautifully detailed acrylic illustrations using a widely varied palette of colors.  And be sure to read the Author's Note at the back of the book, where he includes a more detailed account of the life of Ira Hayes, as well as very useful Bibliography for further investigation.

You can find an extensive Quiet Hero Teacher's Guide provided by the publisher, Lee & Low.

This book is recommended for readers age 8+
This book was borrowed from the NYPL
Posted by Alex at 7:58 AM