We Were Heroes: the Journal of Scott Pendleton Collins by Walter Dean Myers 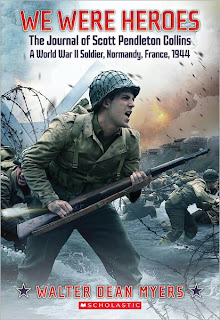 On June 6th of this past week, we marked the 68th anniversary of D-Day, the day the British, Canadian and American troops stormed the beaches of Normandy, France and turned the tide of World War II for the Allied forces.

This week on June 6th, I was sitting in the Children's Book and Author Breakfast at the BEA and listening to a short speech by Walter Dean Myers.  Myers is at the moment serving as the National Ambassador for Young People's Literature, and not surprisingly, he is also the author of more than a few children's and YA books.  Myers work cover a wide variety of topical themes, tough topics such as war, murder, drugs, juvy jail.  But Myers has also written some wonderful historical fiction for teens, like The Glory Field, the 250 year history of an African American family from the first ancestor forcibly brought to this country in 1753 to their lives in the 1990s.

Among Myers's other historical fiction is a short novel about the D-Day landings told through the eyes of a 17 year old boy, Scott Pendleton Collins, who enlists in the army, hoping to emulate the bravery of his great grandfather and father.who fought in the Civil War and World War I respectively.  Their pictures hang in the Collins living room because they are considered war heroes by the family.   And it is Scott's hope that someday his picture will hang with theirs.

No one was supposed to write anything about what was going on in a war in case they were captured and had written some vital information down that could be of use to the enemy.  And Scott knows this, but he begins to write about his experiences anyway.  And so we get a privileged look at his life at this pivotal moment in time, beginning in England and the monotony of training day after day while waiting for weather conditions to be perfect for a successful landing at Normandy Beach. The idea is to first take the beach back from the German army and that to quickly push the enemy further back until France is liberated.  But finally the weather is good and the trip across the English Channel begins.  It sounds so easy in theory, but when the chaplain prays for the souls of those who won't make it, war becomes a sobering reality.  Scott begins to realize this and just before they reach France, he writes in his diary: "We know we're going to be fighting and some guys are going to get wounded or even killed.  This is what war is all about.  I am a little scared myself."

And scared for good reason - the invasion is not anything like Scott could have imagined.  Knowing people would get killed was nothing compared to the reality of what happes in the water and on the beach.  Yet, Scott manages to survive and keep going.  As he moves forward, he gets separated from his outfit and has a few close calls trying to make his way back to them.  But heavy loses keep forcing the army to reform the men into different outfits and companies and he finds himself in different units until he finally finds what is left of outfit his again.

More and more, Scott experiences the loss of old friends he grew up with in Virginia and new friends he made since joining up.  This is perhaps the hardest part of the D-Day battle for him, prompting him to poignantly write in his diary "we had come over here as an outfit of neighbors.  Now there were spaces in our minds where friends used to be."

Of all the books I could have chosen for D-Day, I thought this was the best one.  I had two reasons for choosing it: 1- it shows, without the glorifying graphic detailed gore depicting the horrible realities of war which are always good to remember in the hope that we can avoid future wars, and 2- it reminds us that when we do remember battles like D-Day, it is the soldiers we honor and not the war.

I think Scott is a good example of a brave boy who didn't fully understand war and his diary was his way of trying to come to terms with it, as much as that is possible.  Myers has created an excellent work of coming of age historical fiction, so real feeling there is even an epilogue telling the reader about the lives of certain characters after the war.  In fact,  Scott's diary is so realistic that once I even went to the copyright page to double check that it was indeed fiction.  In the short span of three months, we can watch Scott's coming of age process, from being the kid they called Smoothie because he didn't even shave yet to becoming a seasoned war hero who definitely deserves to have his picture hanging next to his great grandfather and father.

The Journal of Scott Pendleton Collins is the kind of book that ends up on summer reading lists and I hope that some kids actually do read it this summer, as well as perhps some of the other fine books by Walter Dean Myers.

This book is recommended for readers age 9-12.
This book was purchased for my personal library.

A discussion guide for The Journal of Scott Pendleton Collins can be found at Scholastic.

Kid Konnection is a weekly meme hosted by Booking Mama 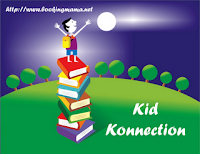