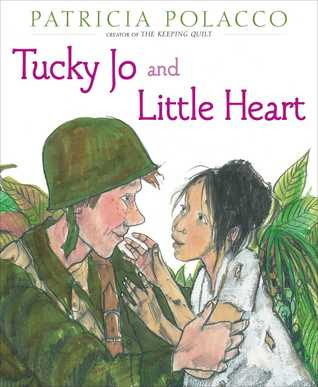 In this picture book for older readers, Patricia Polacco tells the story of Johnnie Wallen, a Kentucky boy who manages to get his parents to say he is older than 15 years, allowing him to enlist in the army and fight in WWII.

After basic training, Johnnie is assigned to the Sixth Infantry, Company G, Twentieth Division and sent to the Pacific theater.  On the ship, Johnnie is called "the kid from Kentucky" by everyone because of his youth.  But the kid from Kentucky was an crack shooter by age 10, and now the army trains him as a marksman and for heavy ordnance (explosives).  In now time, Johnnie earns the nickname the Kentucky Kid after proving himself quite adapt at going into the jungle to seek and destroy machine gun nests.

The Kentucky Kid's unit soon finds themselves on Luzon, an island in the Philippines, where they need to level the land to bivouac and to build an airstrip.  It is a hot job in a jungle infested with biting insects, and after a while, Johnnie is covered with bug bites.  Looking for water to cool his bites, he discovers a small native village where women are trying to catch fish with their bare hands.

There, he meets a little girl who shows him how to treat his bug bites with the leaves of a local plant.  Grateful for the relief and the friendly gesture, Johnny repays the young girl's kindness with the chocolate bar from his K-rations, tells her his name was Kentucky Jon, which immediately becomes Tucky Jo when she repeats it, and he begins calling her Little Heart because of a heart shaped birthmark on her arm.

That night, Tucky Jo whittsd a little hinged doll to give to Little Heart, which delights her.  Then, one day when she didn't show up, Tucky Jo goes to find her in her village.  There, her grandfather, who does speak English,explains that she hasn't spoken since she saw the Japanese kill her mother and take away her father and brother.

And, he goes on to explain, the Japanese took all the young men, all the food and all the fishing lines and nets.  As a result, the people in the village are starving.  Well, Tucky Jo is a doer and in no time, the people in Little Heart's village have all the fish they could eat and preserve - how?  You'll have to read the story to find that out.

When Tucky Jo learns his unit is leaving and will be bombing the jungle, he convinces his sergeant to let him evacuate the village first, which  is very successful.  But when the truck with Little Heart pulls away, it is the late time Tucky Jo sees his little friend.  Or is it?

After the war, Johnnie goes home, a highly decorated soldier, marries his sweetheart and raises a family.  As he gets older, and his health fails, he needs to be hospitalized.  Johnnie's nurse is very kind, so kind that he begins to wonder, especially after he sees the small heart shaped birthmark on her arm.  Could it be...?

According to her Author's Note, Patricia Polacco writes that the story of Tucky Jo and Little Heart was inspired by listening to WWII veterans talking about their experiences in the Pacific Theater and is based on the story that Johnnie Wallen related to her.  Of course, there is some poetic license, but the reader will have to figure that out for themselves.

Palacco has created as story about friendship, kindness,and  ingenuity, while at the same time showing the terrible impact that war has on children.  Little Heart has clearly been traumatized by what she had witnessed, compounded by a state of starvation, but Polacco has portrayed these things in such a way that they won't traumatize the reader, but will evoke feelings of empathy for Little Heart.

And there are the signature Polacco illustrations done in color pencil and markers.  The illustrations capture Little Heart's vulneribility and her fragile state, and Tucky Jo's youth and enthusiasm, and his innate kindness that shines in his eyes.

Tucky Jo and Little Heart  is an ideal book for introducing young readers to the war in the Pacific, or for any one interested veteran stories that come out of WWII..

Johnny Wallen passed away on January 9, 2010.  If you would like to know more about decorated hero of WWII, you can read his daughter's tribute to her father HERE
Posted by Alex at 1:00 AM