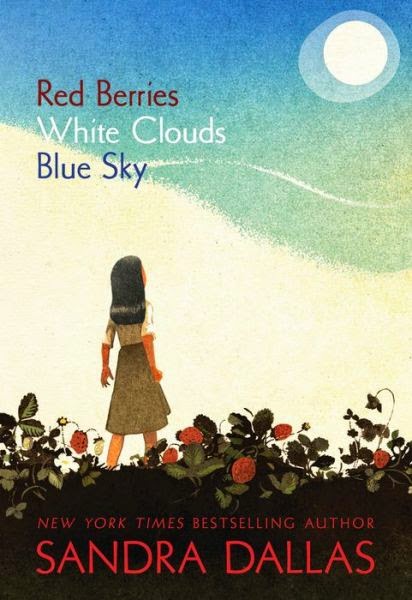 American bornTomi Itano, 12, her younger brother Hiro and older brother Roy, 17, have been raised by their Japanese-born parents to love the United States and to be the best Americans they can be.  Every morning, the family solemnly raises the American flag to fly over their rented strawberry farm in California.  The Itanos, Osamu called Sam and his wife Sumiko, had made a pretty good life for their family.

But in January 1942, shortly after the Japanese bombed Pearl Harbor, it all changed.  Suddenly signs reading "No Japs" appeared in store windows, Tomi was no longer welcomed in her Girl Scout troop, and worse than anything, Pop was arrested as a spy by the FBI.

Then came the notice that the family had two weeks to get ready to go to a "relocation camp" taking only what they could carry in suitcases.  Everything they owned was sold for a few dollars each, prized momentos from Japan were burned and the family found themselves living in a smelly horse stall at the Santa Anita Racetrack for the first months of internment, eventually being transfered to Colorado and a camp called Tallgrass.

Throughout their ordeal, Mom, Tomi, Hiro and Roy keep their spirits up, trying to make the most of the situation they are in, even though they hear very little from Pop, and really have no idea what is going on with him.  Tomi meets a girl at Tallgrass named Ruth and the two girls become best friends.  Roy, who had a band called the Jivin Five in California, decides to form a jazz band at Tallgrass, playing at Saturday night dances.  Mom, who had always been a perfect Japanese wife, doing only what her husband said she could do, suddenly blossomed, teaching a quilting class and making her own decisions.  Hiro and his new best friend Wilson start playing on the camp's baseball team.  All the Itanos seem to have adjusted, believing that living in the internment camp is only a temporary situation and they will eventually be able to return to their old life once the war ends.

But when Pop shows up at the door unexpectedly, everything changes.  He looks almost unrecognizable - gray haired, stooped and walking with a cane.  And he is angry and bitter at what has happened to him, and has turned on his adopted country.  Suddenly, happy, optimistic Tomi begins to behave with the same bitterness and anger towards the country she had always loved.  Tomi has become so inflamed, even Ruth doesn't want to hang around with her anymore.

So, when when a newpaper runs a essay contest, Tomi's teacher wants her class to participate, answering the question Why I am an American, Tomi is faced with quite a dilemma  - how should she honestly write the essay.

Red Berries, White Clouds, Blue Sky is the middle grade version of Sandra Dallas's adult novel Tallgrass, which I have not read.  I've read a lot of books about Japanese internment, and while I do believe it is a shameful period of American history, I can't say I was terribly inspired by this particular book.

Factually, this was a good novel, although a bit too didactic at times.  It is meant for young readers who may not know much about how the Japanese were treated in this country during WWII, and I realize that inserting factual information is a tricky business.  Still, that could have gone more smoothly, or put into notes at the end of the novel.

But I found Red Berries, White Clouds, Blue Sky forced and emotionally cold.  I never really formed a clear picture of Tomi, Roy or Hiro, though I felt their mom was a better drawn character, and it wasn't until Pop arrived at Tallgrass that there was any real feeling.  I kept wondering how and why the Itano family didn't get angry, bitter, depressed at having their lives disrupted, when everything they worked for was lost, and people who were friends suddenly turning on them, at least for a while.  That's a lot of emotional stuff to handle for anyone, but they just easily assimilated throughout their whole ordeal.

In the end, Red Berries, White Clouds, Blue Sky is an OK novel at will give readers some insight to what life was life in the internment camps.  I am, however, now curious to read Tallgrass and see what that novel has to offer.

The Library of Congress has a Teaching Guide using Primary Sources to learn more about Japanese American Internment During World War II HERE,