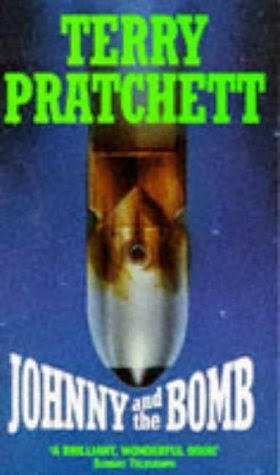 Back in 2010, when I decided to start this blog, I knew I was taking a big risk given the focus of it.  I decided I needed to start with the best,  so naturally, I turned to Terry Pratchett.  Like all his fans, I was already familiar with Terry Pratchett's Discworld series, but of course and as wonderful as it is, it just didn't fit my focus.  I decided to begin my blog with a not very well known book called Johnny and the Bomb.

Written in the early 1990s, Johnny and the Bomb is the third novel in the Johnny Maxwell trilogy that includes Only You Can Save Mankind and Johnny and the Dead.  I liked Johnny and the Bomb so much, I reposted it in 2013, and in 2014, I listed it as one of my Top Ten books about friendship, writing "I loved the friendship between Johnny, Yo-less, Bigmac and Wobbler, three modern boys who time travel back to 1941 and the night of the Blackberry Blitz.  This is friendship as only Pratchett can write it - funny, serious, dangerous, slapstick.." and I might add, very tongue in cheek.  If you haven't read the Johnny Maxwell series, you might want to give them a try.

I already knew that Terry had been diagnosed with early onset Alzheimer's and when Clarion Books published a volume of his early short stories, Dragons at the Crumbling Castle, and having some first hand experience with Alzheimer's, I also knew his writing days were over.  But I still wasn't prepared for yesterday's sad news the Terry had passed away.  Especially not so close to learning the sad news that Mal Peet, another favorite author, had passed away on March 2, 2015.  Both men were such brilliant creative writers, the world is now a sadder place without them.

There are any number of tributes online to Terry, but I think the one published by Neil Gaiman and Ursula le Guin published in The Guardian say it best.

It's hard to say good-bye to an author that I like so much and who has given me hours and hours of reading pleasure, so instead I will just say Thank You for sharing your wonderful, exciting imagination with the rest of the world and for starting me off on my personal blog adventure.