February 13, 2015 marked the 70th anniversary of the firebombing of the German city of Dresden by British and American forces.  The attack lasted for 37 hours and leveled countless building and killed more than 25,000 people.  Happening within months of the war ending, this bombing has remained shrouded in controversy from the beginning.   For more information on this, see History Learning Site: The Bombing of Dresden

You may also recall that author Kurt Vonnegut was a 23 year old prisoner of war in Dresden during the firebombing.  In his introduction to Slaughterhouse Five Or The Children's Crusade, he recalls the difficulty he had trying to write this novel about the Dresden bombing, unable to find the words needed.  As he says in his introduction "there is nothing intelligent to say about a massacre." (pg 19)

While thinking about these things on Friday, I recalled two picture books that I think both remind us of the destructive power of war and reinforce why it is such a terrible thing. 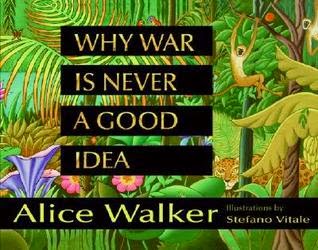 In Alice Walker's poetic work Why War Is Never A Good Idea, she explores what war is all about using incredibly simple words and examples of how it wantonly crashes into and changes the lives of everyday people and creatures, completely disregarding the landscape and natural resources and leaving a trail of destruction behind it: Stefano Vitale's folk art painted illustrations take you around the world, showing how different places and people are impacted the same way by war and, as you can see, he nicely juxtaposes what the lush green world of peace looks like compared to what the destroyed gray world of war looks like: 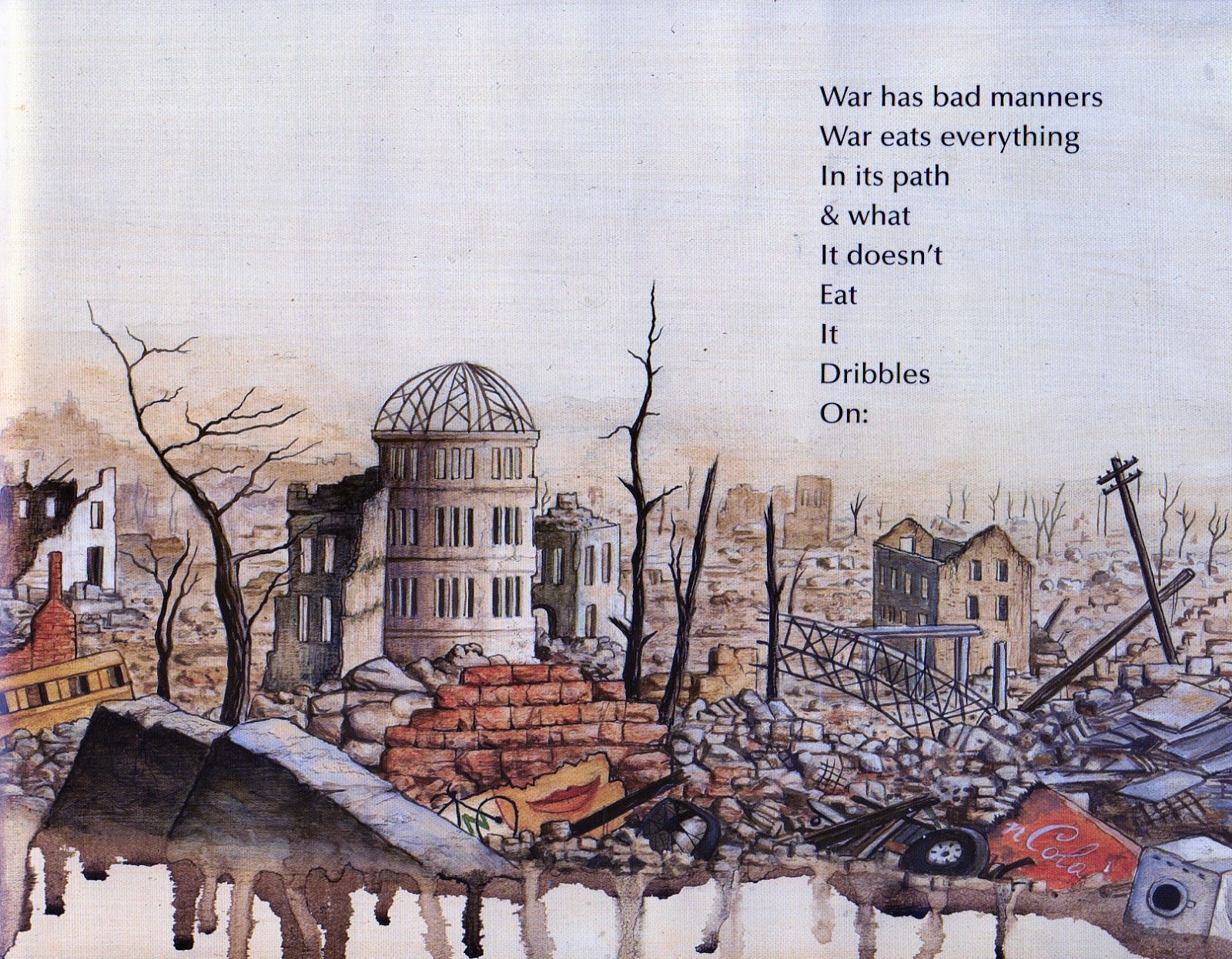 The rhythmic text isn't always the best I've read by Walker, but certainly she gets her pacifistic ideas across, ideas I can completely agree with.  What really makes this a moving, effective work is the combination of text and illustrations.  Each stands better with the other than they would alone.

And, in the end, seeing faces looking down a poisoned water well, Walker poses the question to her reader - What if you become war?  Certainly, food for thought. 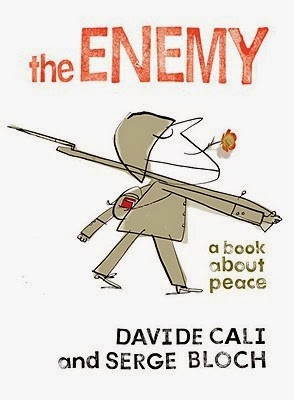 The Enemy: a book about peace by Davide Cali, illustrated by Serge Bloch
Schwartz & Wade, 2009, 40 pages

The second book I pulled off my shelves when thinking about Dresden this week is a book written by Davide Cali and illustrated by Serge Bloch called The Enemy: a book about peace.  I love this book.  It says so much using so little.  Two soldiers, sitting opposite each other in their separate foxholes, are enemies because their manuals told them they were enemies.

One solider claims his enemy isn't human, he's a beast, knows no mercy, will kill families, pets, burn down forests, poison water.  Well, that's what the manual says, anyway.  But sitting in a foxhole isn't easy - one gets hungry, it rains and becomes uncomfortable.

One day, the soldier disguises himself as a bush and leaves his hole, crawling towards his enemy so he can kill him and end the war.  But when he gets there, what a surprise.  His enemy is gone, but has left his things behind - family pictures and a manual that says his enemy isn't human - hmm, wait a minute! Where has he seen that before?  Then, realizing his enemy has crawled over to his hole, the soldier sends outs a peace message to him at the same time the enemy sends one to him.  Doesn't take much to figure out how this ends.

Bloch used simple, almost cartoonish pen and ink illustrations for The Enemy.  The only colors are the khaki of the soldier's uniforms, red blood and the red cover of the manuals they used, though real photos were used for the enemy's family, bring the story close to home, so to speak.  Such spare illustrations really forces the reader to focus on the words of the text, written in the first person by one soldier, which isn't favoritism for one side or the other because you know the other soldier is thinking the same thoughts.

These are definitely picture books for older readers.  They are excellent and complimentary books about war and peace, each extending the other's message.  Both of these books will or should generate conversations and questions by kids and it is advisable to judge the age and child's ability to tolerate these messages, however peaceful they may be meant.

And if you haven't already read Slaughterhouse Five, I highly recommend it.  And have a peaceful day!