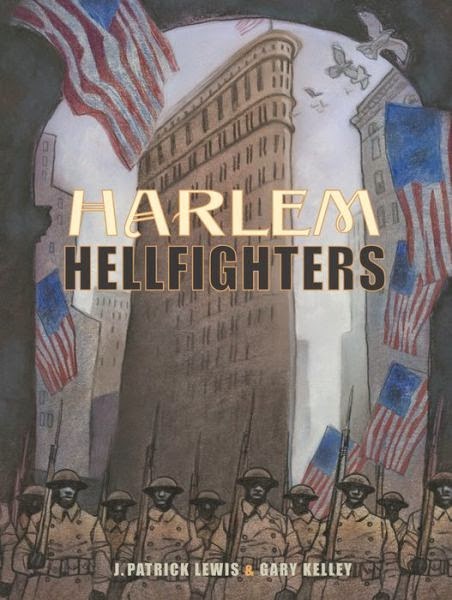 February is Black History Month and this year's theme is A Century of Black Life, History, and Culture.  It is a good time to look back and reflect on the changes and contributions of African Americans to the fabric of American life in the last century.

For example, more and more we are learning about the achievements of African American soldiers in World War II.  Books like The Port Chicago 50: Disaster, Mutiny and the Fight for Civil Rights by Steve Sheinkin,  Courage Has No Color: The True Story of the Triple Nickles by Tanya Lee Stone, Double Victory: How African American Women Broke the Race and Gender Barriers to Help Win World War II by Cheryl Mullenbach, and The Double V Campaign: African Americans and World War II by Michael L. Cooper all highlight the contributions these courageous Americans made in the fight for democracy even as they were being denied their basic civil rights.

Now, J. Patrick Lewis and Gary Kelly, the same duo who produced the lovely book And the Soldiers Sang, about the Christmas Truce in 1914 during World War I, have written a book introducing us to the brave and talented unsung heroes of the 15thNew York National Guard, which was later federalized as the 369th Infantry Regiment, soldier that the Germans dubbed the Harlem Hellfighters. "because of their tenacity."

In beautifully lyrical prose, Lewis tells how bandleader James "Big Jim" Reese Europe was recruited to organize a new black regiment in New York.  Traveling around in an open air double-decker bus, his band played on the upper level, while the new recruits lined up below.  Willing to fight like any American, enthusiastic patriotism may have motivated these young men, but racism at home, and in the army resulted in segregation while training and doing the kind of grunt work not given to white soldiers in Europe, even as they entertained tired soldiers with [Jim] Europe's big band jazz sounds.

Each page tells small stories of the 369th: their heroics, homesickness, the bitter cold, the lynchings back home, the fighting on the French front lines.  Extending the narrative are Gary Kelly's dark pastel illustrations.  Kelly's visual representations of the men of the 369th Infantry are both haunting and beautiful.   He has used a palette of earth tones and grays, so appropriate for the battlefields and uniforms of war, but with color in the images of patriotism, such as flags and recruiting posters, and highlighting the reasons we go to war.   Some of Kelly's image may take your breath away with their stark depiction of, for example, the hanging figures, victims of a lynching, or the irony of the shadowy faces of people in a slave ship hull, shackles around their necks, on their voyage to America and slavery next to a soldier heading to Europe to fight for freedom and democracy.

Harlem Hellfighters is an exquisitely rendered labor of love, but readers may find it a little disjointed in places.  Lewis's fact are right, though, and he also includes a Bibliography for readers who might want to know more or those who just want more straightforward nonfiction books about the 369th Regiment. 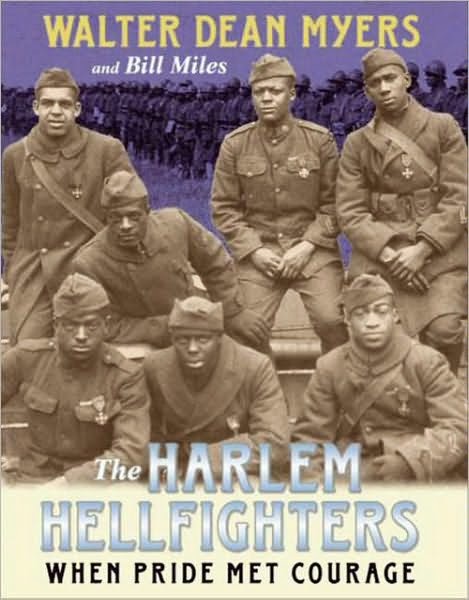 As a picture book for older readers, Harlem Hellfighters would pair very nicely with Walter Dean Myer's impeccable researched and detailed book The Harlem Hellfighters: When Pride Met Courage written with Bill Miles.  Myer's gives a broader, more historical view of these valiant men.  These would extend and compliment each other adding to our understanding and appreciation of what life was like for African American soldiers in World War I.

February is Black History Month
Posted by Alex at 9:37 AM