Swing Sisters: The Story of the International Sweethearts of Rhythm by Karen Deans, illustrated by Joe Cepeda 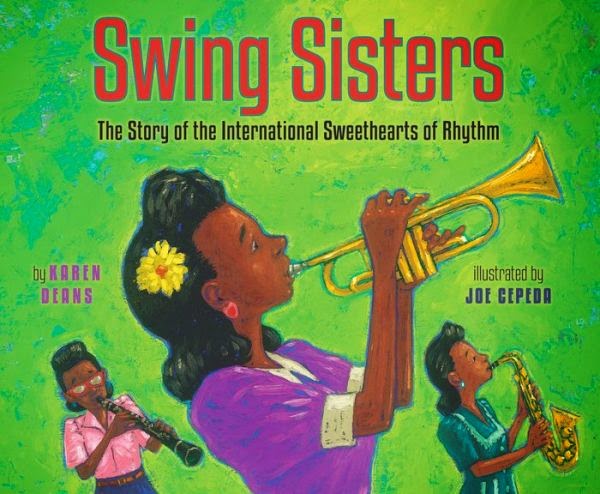 It's Women's History Month and this year's theme is Weaving the Stories of Women's Lives, so I thought I would begin the month with a new picture book for older readers that introduces them to the remarkable International Sweethearts of Rhythm.

Shortly after I began this blog, I reviewed a wonderful middle grade book by Marilyn Nelson called  Sweethearts of Rhythm: The Story of the Greatest All-Girl Swing Band in the World.   But where Nelson's book covers the kind of music and the places where the Sweethearts played, Swing Sisters begins at the beginning.

The girls were educated, housed, clothed and fed and in return they all did chores to help keep things running smoothly and well.  In 1939, Dr. Jones started a band that he called the Sweethearts with some musically talented girls to help raise money for the school.  The music they played was called swing or big band music, by either name it was Jazz and people couldn't get enough of it.

Dean describes how the girls stayed together after leaving Piney Woods, hoping to make a living as musicians.  They would live, sleep, eat and play music, traveling around from gig to gig in a bus they called Big Bertha.  Band members came and went, and before long the band was no longer made up of only African American women, but included many races and nationalities.  As a result, they decided to call themselves the International Sweethearts of Rhythm.

But while the band hit the big time, they still didn't get paid as much as their male counterparts nor were they taken as seriously, no matter how good they were.  Not only that, Dean points out, but in the Jim Crow south, because they were interracial now, traveling and performing became risky and she includes some of those scary, dangerous incidents they faced.

In 1945, as World War II was winding down, the Sweethearts found themselves on a USO tour thanks to a letter writing campaign by African American soldiers.  But sadly, the Sweethearts disbanded after the war and the members went their separate ways.

Dean does an excellent job of introducing the Sweethearts to her young readers and the difficulties an all-women's interracial band faced back in the 1940s balancing it with positive events and the strong bonds of friendship among all the members.

Cepeda's colorful acrylic and oil painted illustrations match the energy of the music the Sweethearts played with a bright rainbow palette of greens, pinks, purples, yellows, blues and orange.

So many wonderful books are coming out now introducing young readers to some of the greatest artists and musicians of the 20th century and this book is such a welcome addition.

You can see for yourself just how good the Sweethearts were in their heyday: