The Boys Who Challenged Hitler: Knud Pedersen and the Churchill Club by Phillip Hoose 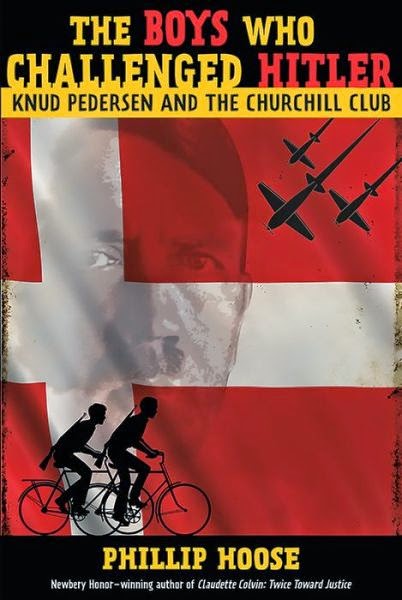 When the Germans invaded Denmark on April 9, 1940, many Danes welcomed them, but many more were filled with anger as they watched these soldiers taking over their towns and cities.  But what could they do?   The Danish army was simply no match for the Germans.  They may not have been willing to take on Hitler but Knud Pedersen, 14, a successful student living in Odense, Denmark, decided he might just be able to do something himself.

Very carefully, Knud, his older brother Jens, and a handful of fellow students decided to form a resistance group.  Calling themselves the RAF Club, named for the pilots who were defending Britain against Luftwaffe attacks, and modeling themselves on what they knew of the Norwegian Resistance, their goal was to disrupt their occupiers anyway they could.

It didn't take long for the RAF Club to gain a reputation, irritating the Germans and eluding the Danish police.  But in the spring of 1941, Knud's father, a Protestant minister, moved his family north to Aalborg and a new church.  Knud and Jens were enrolled in the Cathedral School there, and again, it didn't take long for them to form a new resistance group with their new school chums.  This time, they called themselves the Churchill Club, after their hero, Winston Churchill.

The boys of the Churchill Club, with bikes as their only means to transportation, began to commit acts of satotage all over Aalborg.  Not satisfied with vandalizing Germany property, usually setting fire using a small can of petrol they carried in the book bags, the boys decided they needed weapons.

Cautiously waiting and watching, the boys slowly began to acquire guns from unattended German cars, creeping into rooms and taking guns right out of the holdsters of German solders, even sneaking into coat rooms in restarurants to help themselves to whatever weaponry they could find.  Pretty soon, they had quite a cache of guns and ammunition, even snagging a machine gun at one point.

And the boys managed to frustrate the Germans to the point that their resistance activities were known about in Nazi headquarters in Berlin.  Both the Danish police and the Nazis were trying to catch these resisters, at first never dreaming these acts of sabotage were being committed by a group of schoolboys.  And there were plently of close calls that could have ended in their capture.

But in May 1942, the Chuchill Club's luck ran out and the boys were arrested.  They were tried and imprisoned, most of the boys sent to an adult prison, where they were essentially in solitary until their release in 1944.  Imagine their surprise when they returned home and discovered to what extent the Danish Resistance had grown.  Because a handful of young boys, ashamed of their country's behavior in the face of occupation, decided to do something on their own?  Certainly, that is what Philip Hoose implies and I am inclinded to agree.  Once the boys were caught, and despite Nazi censorship attempts, the Churchill Club became an international story.

The Boys Who Challenged Hitler is a inspiring, rivating story about courage, conviction and action.  Hoose interviewed Knud Pedersen for a week in 2012 and so a great deal of this book consists of his recollections, told verbatim.  In between, Hoose gives the reader enough information about Denmark, including why it was important to the Germans, about life under the German occupation, the attitude of the Danish people - including Nazi collaborators.

There are numerous photographs throughout the book, including photos of the boys in the Churchill Club.  In the photo below, I believe the tall boy with the pipe is Knud, since he comments several times that he was the tallest of the group.  I read the ARC, so I hope this photo is labelled in the published edition.  And a word about the pipe - all of these boys, who were in their mid-teens, smoked a pipe.


Hoose does end the book by telling the reader what became of each of the members of the RAF and the Churchill Club after the war.  These is also a Selected Bibliography, including books, articles and web sites, even YouTube recordings the reader can listen to, and extensive Notes.

The Boys Who Challenged Hitler: Knud Pedersen and the Churchill Club is a well-written, well-researched book by an author who specialized in nonfiction about young people making a difference and is one that I believe teen readers will find exciting, informative and even relatable.

This book is recommended for readers age 12+
This book was an EARC received from NetGalley and will be available May 12, 2015.

Email ThisBlogThis!Share to TwitterShare to FacebookShare to Pinterest
Labels: Denmark, Resistance, YA