Ghosts of War: The Secret of Midway by Steve Watkins 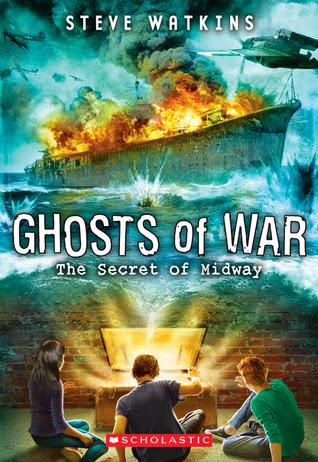 When Anderson, 12, and his friend Greg decided to start a band, they were given permission to practice in a basement room at his Uncle Dex's junkshop, provided they clear it out themselves.  Alone in the room, Anderson notices an old military trunk with a strange glow to it.  He finds an old Navy peacoat in it that he decides to keep.  Inside the coat pocket, is an old letter and when he pulls it out, he hears a voice saying "that's mine."

Later that night, the voice materializes in Anderson's bedroom.  It belongs to a young World War II sailor who doesn't seem to remember who he is or what happened to him and has been living in a kind of limbo since the war. Anderson is understandably freaked.

The next day, while discussing with Greg the possibility of adding keyboard player Julie Kobayashi to the band, Anderson's ghost appears in the cafeteria.  And it seems that Greg and Julie can both see him.  Pretty soon, the trio decides to help their ghost find out about himself.  Anderson tracks down the recipient of the old letter he found in the peacoat.  It turns out to be an old girlfriend, Betty Corbett,  who tells them their ghost is named William Foxwell, that he went missing in action on a ship in the Pacific Ocean and presumed dead.  Later, she married William's friend and they named their son after him.

One helpful clue about William is the mention of the Battle of the Coral Sea in his letter.  Anderson and his Uncle Dex both are history buffs, and Uncle Dex knows all about this battle.  Little by little, Anderson, Greg and Julie begin to piece together that particulars of William's life in the Navy, and as they do, William begins to remember things as well.

All of this is taking time and it seems that William is having a harder and harder time materializing and is, in fact, beginning to fade away again.  Then, matters get more complicated when a Japanese sailor who has been keeping a secret about William and the Battle of Midway for 70 years refuses to tell them what really happened.

Will Anderson, Greg and Julie be able to solve the mystery surrounding William's death in time for him to find eternal peace?

Ghosts of War: The Secret of Midway is a short but exciting mystery, one that will definitely appeal to boys as well as girls.  The mystery is historically based, so there is lots of information about the two battles mentioned and what being caught in the middle of war is really like.  But we also see how the war impacted everyone, including those like Betty Corbett on the home front.

Besides William's story, we also learn about Anderson and Greg's life, but not so much about Julie's yet.  Anderson's mother suffers from Multiple Sclerosis and is often in pain and tired.  His dad works long hours and Anderson frequently comes home and makes his mom some dinner.  Greg's dad is a binge alcoholic with a short temper.  When things get bad, Greg sneaks out of the house and stays with Anderson.

And, of course, because they are sixth-graders in a junior high school, there are bullies to contend with. All of this makes for a well rounded story and gives depth to the characters, who, I assume, we will get to know better and better.  Ghosts of War: The Secret of Midway is the first in a series of books, and yes, you guessed it, they all begin with the mysterious glowing military trunk.

This is a great book for kids who like history, especially military history, but even if history isn't their thing, it's still an exciting read.

This book is recommended for readers age 9+
This book was sent to me by the publisher, Scholastic