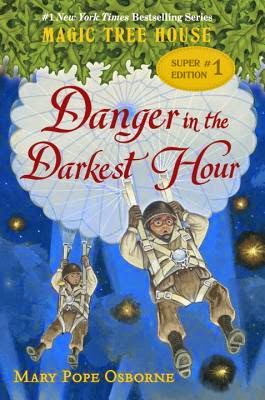 One warm June day, Jack and Annie, siblings living in Frog Creek, PA, receive a message via carrier pigeon.  The message is from their friend Teddy, asking them to come to Glastonbury, England immediately, their help is needed.

When Jack and Annie arrive in Glastonbury, they are met by Teddy who tells them they have arrived on June 4, 1944, two days before the D-Day invasion at Normandy, France by the Allies forces and the beginning of the end for the Nazis.

Teddy and Kathleen, who iare really young enchanters from Camelot, have been made agents in the Special Operations Executive (SOE) by Winston Churchill to do undercover work in countries occupied by the Nazis.  But now, Kathleen is still in Normandy, France and needs to be rescued, but they only clues to her whereabouts is a coded riddle she sent Teddy by carrier pigeon.

Jack and Annie's job is to parachute into France and find Kathleen within 24 hours - they need to be gone by the time the invasion begins.  Jack and Annie are told to try to find members of the French Resistance to help them, but to avoid the Nazis, who are everywhere.  But when they land in a French field, they are spotted and chased by Nazis using a dog.  Jack and Annie hide in a barn, calm the dog down and are found by a man and his wife, whose sons were members of the Resistance.

The couple feeds them, and help to figure out the riddle from Kathleen, then they give Jack and Annie two bikes and some money, and send them on their way.  The road to Kathleen is fraught with both friend and foe, but eventually the two find her and now, they must figure out how to get her back to England. It seems Teddy forgot to give them the magic wand Kathleen needs, since her innate magic seems to have disappeared.  Not only that, but Kathleen has acquired some fellow travelers she is determined to get out of France, a group of very young Jewish orphans, which means a bigger, more noticeable plane will be needed for the rescue.  Oh yes, and a large vehicle to get all of them to the pickup point.  And there is only a few hours left before the invasion begins, with all its bombing and shooting.

Can everyone be rescued in time and will Jack and Annie find their way back to Frog Creek?

This is an interesting chapter book.  It is longer than the previous Magic Tree House books and the subject matter is much darker.  And since the magic wand was forgotten, Jack, Annie and Kathleen have to rely on their own skills to solve problems and figure out how to escape France before the invasion.

Osborne gently introduces the reader to Hitler and the Nazis, and though she never uses the word Holocaust, Teddy does tell Jack and Annie that "[the Nazis] have killed countless innocent civilians, including millions of Jewish people." (pg 25)  This may sound a little watered down, but consider the age of the reader and that for many this may very well be an introduction to that "darkest hour" of modern history.

i didn't expect to really like this book, but I did.  With a willing suspension of disbelief, I found the story compelling and exciting, and I felt it was very clear that Osborne is comfortable with her characters and knows her audience.  Things do work out nicely in the end, which is OK when you have magic on your side (and yes, there was some surprising magic used in the end).

At the back of the book, there is a "Track the Facts Behind Jack and Annie's Mission" that includes lots of information ranging from the use of pigeons in war, the German Enigma machine, and other interesting facts, all age appropriately described.

Besides the colorful cover illustration, showing Jack, in all his fear, and sister Annie parachuting into France, there are some wonderful black and white double page illustrations throughout the book, all done by Magic Tree House illustrator Sal Murdocca.

I have to confess, I have never read a Magic Tree House book before this.  Sure, my Kiddo and all her cousins read and loved them when they were in elementary school.  So did the kids in my classes, which made me happy since most of them were not yet reading at grade level.  But I did hear Mary Pope Osborne speak at a BEA Children's Author Breakfast one year, so I knew that author Mary Pope Obsorne is a very generous donor of her books to kids who might not otherwise get copies of them.  And I could help but wonder how many kids have become readers thanks to the Magic Tree House books?

This book is recommended for readers age 7+
This book was borrowed from the NYPL
Posted by Alex at 10:11 AM