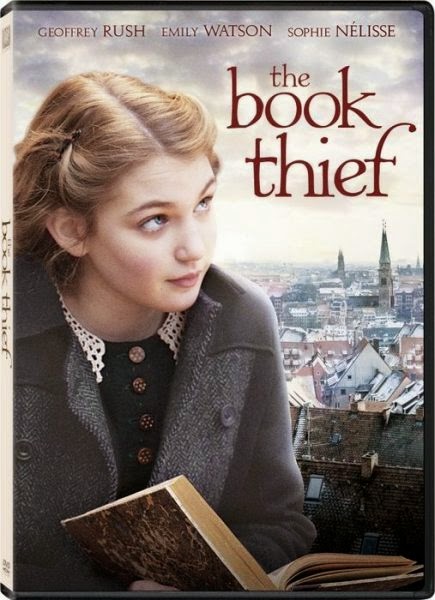 I've waited a whole year to watch this movie.  When it opened, I had just reread the novel and wanted to put some distance between the written word and its cinematic representation.  Also, the critics really didn't like this movie.  In his New York Times review of November 7, 2013, Stephen Holden, described The Book Thief as a "shameless piece of Oscar-seeking Holocaust kitsch."    At rogerebert.com, critic Godfrey Cheshire echoes this sentiment, writing that there is a distinct air of solipsism in the film, that main character Liesel never undergoes a transformation, so that the actual tragedy [that is the Holocaust] is reduced to the role of kitschy backdrop.

But, let's not forget that in her March 27, 2006 review for the NY Times Janet Maslin snarkily referred to the novel as "Harry Potter and the Holocaust."  Yet, it has been on the NY Times YA best seller list almost consistently since it come out and almost everyone who reads it, loves it.

OK, back to the movie with a Spoiler Alert Warning

It's  April 1938 and the voice of Death begins to tell the story of young Liesel Meminger, on a train with her mother and brother traveling to their new family.  The children are being taken from their mother because she's a communist.  When Liesel's brother dies on the trip, he's buried by the side of the tracks.  One of the gravedigger's drops his manual and it becomes the first book Liesel steals.

Arriving at the home of Hans and Rosa Hubermann on the ironically named Heaven Street, it soon becomes apparent that Liesel can't read and she becomes a target for the class bully, Franz Deutsche.  So, gentle, kind-hearted Hans teaches her how to read in the basement of their home, using chalk to list the words she learns on the walls.  Rosa Huberman appears to be a hard-hearted women who calls every one Saumensch (pig) and takes in the Bürgermeister's laundry to make some money.

Liesel becomes friends with neighbor Rudy, who is immediately smitten with her.  Rudy also admires runner Jesse Owens, and works hard to emulate his skill, which earns him a place in a special Nazi school when he turns 14.

After Kristallnacht in November 1939, Max Vanderburg arrives ill at the Hubermann's home one night seeking refuge.  Max is on the run from the Nazis because he is a Jew, but his father had saved Hans's life in WWI and so the Hubermann's willingly take him in despite the danger to themselves and Liesel if they were to be caught.

During a book burning, Liesel steals another book.  But this time someone sees her and when she next delivers the Bürgermeister's laundry, his wife invites her in to see and use their library to her heart's content.  Unfortunately, when her staunch Nazi husband discovers it, he throws Liesel out and fires Rosa.  Later, when Max becomes very ill, Liesel starts to sneak into the Bürgermeister's library to borrow books to read to him.   Liesel and Max are definitely kindred spirits when it comes to their love of books, reading and words.

Despite living in Nazi Germany, Liesel is surrounded by people who love her and whom she loves.  But Death soon visits again and Liesel loses everyone she loves.  Death also informs us that Liesel grew up, married (not Max), had children and grandchildren, and became a successful writer.

Not everyone disliked this movie as intensely as the two critics above.  And neither did I, although I do think it is a somewhat flawed film.  Cinematically, it is a beautiful film.  It was directed by Brian Percival, whom you might remember directed some of the Downtown Abbey episodes.  And there is a definite Downtown feel to The Book Thief, mostly notably in the cinematic color palette Percival used.  It was done in dark shades of browns, blacks, and red so that the bright red, white and black of the Nazi flag really stands out, as does the fire yellows in the book burning scene.

Living in Nazi Germany meant leaving in constant fear, but I didn't necessarily feel that that in the movie, as much as in the book.  Sure, there were air raids and house searches looking for hidden Jews and constantly being hungry, there was even a scene where Jews were forced to march through the streets in a roundup.  And when Hans stands up for a Jewish acquaintance, he finds himself drafted into the German Army despite his age.  But there was a certain lack of feeling on the part of the characters even while they are endearing themselves to you.

The person I watched the movie with thought it was odd that Liesel and Rudy were both in the Hitler Youth, but they would have had no choice, that was mandatory by then.  Penalties for not letting your children join were harsh and stiff.  But it is clear, even as Germany is losing on the Eastern Front, Liesel believes what she has been told - that Germany is winning the war.

The book burning seems strangely out of place.  Book burning were done in the early 1930s,  In all my research, I don't recall hearing about book burnings happening the late 1930s or early 1940s.  It seems a  plot device to bring Liesel and the Bürgermeister's wife together on a mutual appreciative ground.  Her dead son was also a lover of books and the library that temporarily is made accessible to Liesel belonged to him.

Five years pass during which Liesel lives with the Hubermann's that we see and in all that time, Liesel and Rudy don't get older.  The only concession to time passing this the length of Liesel's hair, but Rudy never matures beyond his original 12 years.

Those are my main gripes about The Book Thief.  On the whole, I did like the film, and thought the acting was excellent.  Geoffrey Rush and Emily Watson play the Hubermanns,  Sophie Nélisse plays Liesel and Nico Liersch is Rudy.  Some complaints were made because the characters speaks English with German accents with the occasional German word.  My feeling was that it bridged the fact that I was watching a German story in English and helped to keep the sense of place.