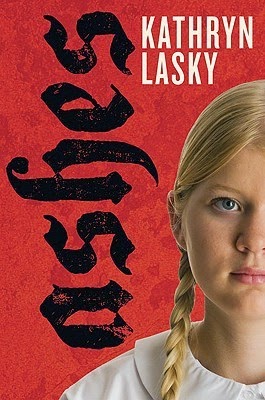 Life is pretty comfortable for Gabriella Schramm, 13, called Gaby by friends and family.  Living in 1932 Berlin, her upper middle class family is better off than most Germans at the time.  Her father is a renowned scientist, teaching astronomy at the University, and is friends with Albert Einstein.  Her mother, an former pianist who gives lessons at home now, hob nobs with Baba, a well-respected Jewish society columnist for the only newspaper in Berlin that isn't pro-Nazi.  Gaby's older sister, Ulla, is scheduled to begin studying at a conservatory in Vienna next year.  And Gaby, who loves to read anything she can get her hands on, including Ernest Hemingway, Jack London, Mark Twain and my personal favorites Rainer Maria Remarque and Erich Kästner, is looking forward to reading Heinrich Heine's poetry in Gymnasium after summer vacation.

But things are beginning to change, both within Gaby's family and all over Germany.  First, Ulla insists on remaining in Berlin for the summer instead of going to the family's lakeside vacation home, claiming she has a bookkeeping job at the cabaret where her boyfriend Karl, an engineering student, works.  But when Karl and Ulla come to visit, Gaby begins to suspect that Karl is a Nazi supporter.  She had already suspected the same thing of the family housekeeper, Hertha and the man who maintains their Berlin apartment building.  In fact, Gaby has noticed a significant increase in the number of Brown Shirts (SA) and Black Shirts (SS) all over Berlin despite the ban on them.

Back in school after vacation, Gaby and her best friend Rosa are overjoyed to begin studying literature with the very beautiful, kind, well-dressed Frau Hofstadt, who is picked up everyday by a mysterious limousine.  But, at home, the talk is more and more about the political situation, which in 1932 is all over the place, though everyone is relieved when the Nazis loose seats in the Reichstag (Parliament), hoping that that will be an end to Hitler and his Nazi party.

But that's not what happens at all and through all kinds of twists and turns, Hitler is named Chancellor by President Hindenburg at the end of January 1933.  And with amazing speed, Gaby watches her previously safe, happy world fall completely to pieces.

The period 1919-1933 was such a complicated time in German history and politics.  The Nazis referred to it as the Kampfzeit, the time of struggle to gain acceptance and power for their radical policies.  Lasky covers only 1932-1933 in Ashes and kudos to her for successfully tackling it in a novel for young readers.  There is lots of talk about events that actually happened, and Lasky provides enough information to understand it without overwhelming or boring the reader.

Ashes is a well-written novel, and although it is a little slow in places, given the time and place of the action, it is indeed a worthwhile read.   I particularly loved that each chapter begins with a quote from a book Gaby loves and which foreshadows what happens in that chapter.  And since Gaby witnesses the Nazi book burning on May 10, 1933, it is all the more poignant a reminder of some of what was lost in that tragic event.

The novel is told from Gaby's point of view, which gives us her very subjective, but very astute observation, not only of what is happening around her, but how she thinks and feels about it all,  A fine example of that is when she witnesses her former math teacher, Herr Berg, being removed from her school by the Nazis for being Jewish, and disappears.  The reader feels her shock, disgust, sadness and  despair all at the same time.

Some of the scenes may feel a little cliche and I am not the first person to realize that Karl resembles Lisle's Hitler Youth boyfriend from The Sound of Music, and that there is a scene similar to one in Cabaret, in which everyone in an outdoor Biergarten joins a Hitler Youth in singing a Nazi song.  But, these scenes also make a necessary point (and people have traditionally joined in singing in Biergartens in Germany, it wasn't just a Nazi thing to show support).

Ashes is a nice contribution to the body of Holocaust and World War II literature and on its own, a very interesting book about a very complex time made accessible by good research and skillful writing.

This book is recommended for readers age 11+
This book was purchased for my personal library
Posted by Alex at 8:00 AM

Email ThisBlogThis!Share to TwitterShare to FacebookShare to Pinterest
Labels: Germany, Nazis, Pre-WWII, YA