The Winter Horses by Philip Kerr 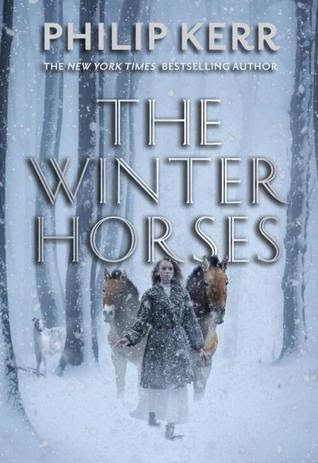 In the Summer of 1941, the manager of the large animal reserve in the Ukraine, Askaniya-Nova, told his senior caretaker Maxim Borisovich Melnik to kill all the animals before the Germans arrived and did it themselves to replenish their dwindling food supplies.

But Max can't bring himself to do it, and when the Nazis arrive and take over the reserve, he is sure that the Well-educated, well-bred, well-spoken Captain Grenzman will spare the animals, especially his beloved untamable Przewalski's horses.  But soon it is winter and the soldiers have to eat and little by little, the animals on the reserve are killed until only the small herd of Przewalski's horses are left.

Until the day Grenzman tells Max that he has received his orders from Berlin to "remove from the animal population of the Greater German Reich what is, after all, a biologically unfit species, in order to protect the line of decent domesticated horses…from possible contamination by your wandering pit ponies." (pg 25) Besides, the Nazis have run out of food again.

Meanwhile, Kalinka, 15, the only Jewish survivor of a Nazi mass shooting that included her entire family, has found her way to Askaniya-Nova, where she befriends and is befriended by the lead stallion and mare of the Przewalski's herd there, a most unusual thing for these horses to do.

Like Max, Kalinka witnesses and is horrified by the killing of the herd of Przewalski's horses and when it was over, she goes looking for the mare and stallion who had helped save her life to see if there is anything she can do for them.  Not finding them, Kalinka returns to her hiding place, only to discover that the two horses have made their way back there, too.  But the mare has a bullet lodged in her shoulder and Kalinka knows she needs to seek help from Max.

Max is overjoyed to see the two Przewalski's and welcomes Kalinka with open arms.  He removes the bullet and puts the two horses and Kalinka in the abandoned waterworks buildings not far from his cottage.  But soon, that becomes a dangerous place for them, as well, and the two hatch a plan to get both the horses and Kalinka to where they can find safety with the Red Army.

It's a dangerous plan, but if it doesn't work, it will be the end of the Przewalski's horses.

The Winter Horses is based somewhat on the real shooting of Przewalski's horses by the Nazis during WWII, but the rest of the story should not be seen as a history but as a legend, which contains only an element of historic fact, but also has a rather mythical quality.  Or at least, that is how Philip Kerr introduces this story of an unlikely hero, heroine and the two horses they want to save, and which accounts for the very understated element of fantasy in the novel.

I though that because of this legend quality Kerr gave his story, that writing the novel with an omniscient third person point of view really worked well.  It provided just the kind of distancing that a novel like this needs.  In fact, it reminded me of the original Kinder- und Hausmärchen by the Brothers Grimm, which all had that same dichotomy of cruelty and kindness to them (unlike their prettified, disneyfied fairy tales counterparts of today) found  in The Winter Horses.

Even so, I suspect that this is may be as difficult a story to read for others as it was for me.  The calm cruelty of Captain Grenzman and his obsessive need to eradicate the all horses was almost unbearable, mainly because it was so analogous to what was being done to the entire Jewish population.

Still, I highly recommend The Winter Horses to anyone with an interest in WWII, and given what is going on in the Ukraine at the moment, readers may find this even more of an interesting read, asking themselves, as I did, will history be repeating itself here?  After all, the Askaniya-Nova reserve still exists in the southern Ukraine.

Philip Kerr is a favorite author of mine, having written a wonderful mystery series about a detective named Bernie Gunther set in pre-war Berlin for adult readers.  The Winter Horses is his first historical fiction for young readers (but not his first work for kids - as Ms. Yingling points out in her review, Philip Kerr also wrote a fantasy series, Children of the Lamp,  under the name P.B.Kerr).