The End of the Line by Sharon E. McKay 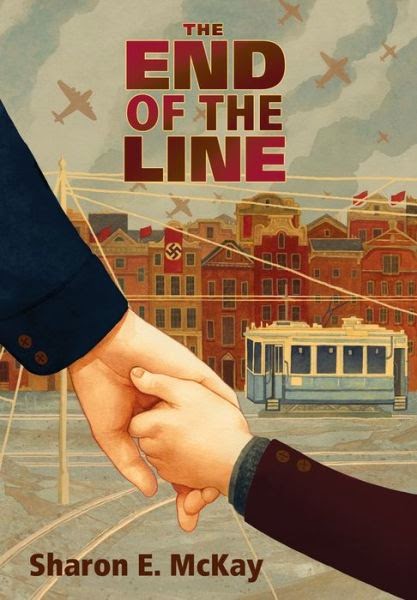 It is Fall 1942 and the Nazis have been occupying Holland since Spring 1940.  Beatrix, 6, and her mother are Jews who have been running and hiding from the Nazis for that long.  But now it is time to hid Beatrix in a safer more stable place.

Sitting on the tram, on their way to meet the woman who would take Beatrix to safety, her mother is suddenly taken away by the Nazis who regularly board and search the trams looking for Jews.  Beatrix is left sitting on the tram by herself.

Brothers Lars, 63,  and Hans Gorter, 65, both life-long bachelors, work together on a tram - Hans driving it while Lars collects tickets.  When it looked like the Nazis were also going to take Beatrix away, Lars suddenly told them that she was his niece.  The war and all the rumors they had heard about Nazi treatment of Jews suddenly became real for the brothers.

Now, these kind, well-meaning though naive brothers must learn how to care for a little girl, who has been traumatized by the loss of her mother and who must become someone different than who she really is - if only for the duration of the Nazi occupation.  Luckily, Hans and Lars have help from their elderly neighbor Mrs. Vos, 80, and from a new, younger neighbor, Lieve van der Meer, 30, who husband is rumored to have escaped Holland and is flying for the RAF.

Why would two older men who have made it a point to always live quietly and keep a low profile, suddenly risk everything, including their lives, for a little girl they know nothing about?  That is the question at the heart of The End of the Line and Canadian author Sharon McKay answers it eloquently as the story of Beatrix and her new uncles unfolds.

There are lots of books about Jewish children who were rescued by people during the Holocaust and who did what they did simply because they believed it was the right thing to do.  But these stories are generally written from the point of view of the child.  What makes The End of the Line stand out is that it is written from the point of view of the two brothers. and yet it is a thoroughly appealing, totally engaging book for young readers accustomed to reading about protagonists their own age.

Living under Nazi occupation meant living under a daily shroud of fear and anxiety, never knowing if you were going to be singled out at any given moment.  There are plenty of these moments portrayed in the story of Hans, Lars and Beatrix, like the time Beatrix whispers Geb Achting, Yiddish for be careful, to a young Nazi soldier.  However, the story offers more insight into what it was like for the brothers in order to survive the war and the occupation of Holland, from dressing Beatrix as she grows, managing to find food when there is almost none to be had, even to buying her a doll to cuddle and comfort herself with may be new experiences for Hans and Lars, but keeping her safe from the Nazis turns out to be instinctual for these kind brothers.

The End of the Line is an interesting supplement to Holocaust literature written for young readers by an author who is part of the Canadian War Artist Program and has already written books about child soldiers in Uganda, young girls caught in the war in Afghanistan and short stories dealing with the Holocaust with Kathy Kacer, another Canadian artist who also writes books for young readers about the Holocaust.  This should be a welcome addition to any library.

You can find more information and a very useful lesson plan for The End of the Line from the publisher HERE
Posted by Alex at 9:48 AM