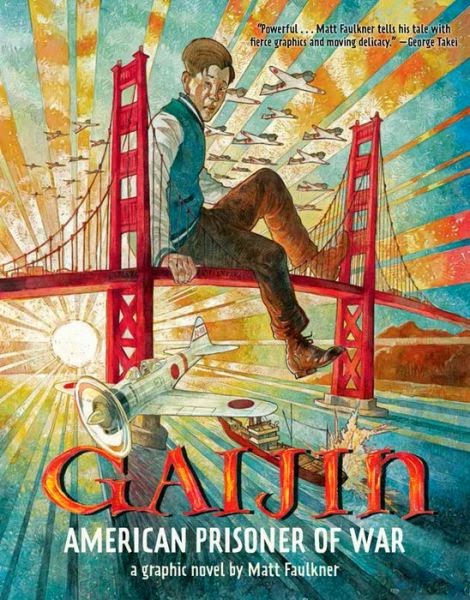 Koji Miyamoto, 13, his American mom and Japanese dad have been living a quiet life in San Francisco.  But when the Japanese attack Pearl Harbor on December 7, 1941 all that changes immediately.  Koji secretly fears his father may have been part of the attack since he was in Japan when it happened taking care of his sick father.  At school, he is picked on by a group of bullies, the trolley operator won't let him on the board and the government has taken away the family radio, insinuating that all Japanese are spies.

Finally, Koji's mom receives a letter saying that he is to be sent to a "relocation camp" which is nothing more than the Alameda Downs, a former racetrack.  His mother decides to go with him, but because she is white, not Japanese, she and the camp commander become friends.  Koji, who is called Gaijin (outsider) by the other Japanese boys finds himself getting bullied by them.  After getting caught fighting, an elderly old family friend man, Yoshi Asai,  takes Koji under his wing.  But after the two create a Victory Garden, the bullies go after it night after night.

Koji finds himself getting more and more angry as the days go by, at the government for putting them in horse stables and then treating them like they are all criminals; at the bullies for making him feel like he doesn't belong anywhere.  Pretty soon a rift develops between Koji and his mom, fueled by the bullies repeatedly calling her the camp floozy.

The bullies set up all kinds of dangerous tasks for Koji to do with the promise of belonging as his reward.  As the tasks get riskier, Koji faces the possibility of being sent to a very unpleasant correction facility alone.  Is his desire to belong or his anger so great that his is willing to risk that fate?  Or can the gentle elderly Mr. Yoshi Asai help keep Koji from getting into more trouble?

Gaijin: American Prisoner of War is based on a true story from author/illustrator Matt Faulkner's family, as he explains at the end of the story, making it personal and affecting.  Using the graphic novel format, allows the reader to see the anger, confusion, fear, all the understandable feelings of a young man forced to live the way the Miyamoto's were, and being treated like an enemy alien because of his race, not his citizenship.

The illustrations are done using watercolor and gouache in rich vibrant colors very reminiscent of the early 1940s.  Gouache is the perfect medium for this graphic novel, with its large bold energetic  images, sometimes only one to a pages, other times as many as five.  Much of the story comes through the illustrations, with little text but together they really capture every humiliating element of the internment of the Japanese in WWII.

The more I read graphic novels, the more I appreciate them.  When they are done well, as Gaijin is, they can be a way of introducing difficult topics to young readers and may serve as a way to interest reluctant readers.

Another excellent book about this still not widely known about part of American history.

This book is recommended for readers age 9+
This book was bought for my personal library
Posted by Alex at 12:58 PM