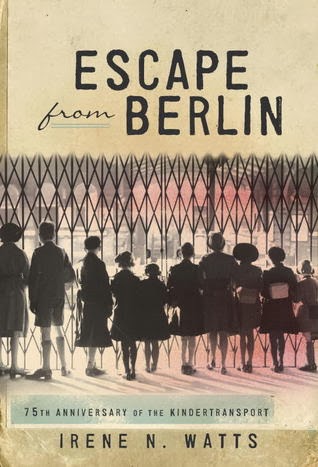 Escape from Berlin is an omnibus of three of novels, each of which had been previously published by Irene N. Watts, and have now been reprinted for the 75th anniversary of the Kindertransport on December 1, 2013.

The Kindertransport was a short-lived program that rescued 10,000 Jewish children from Nazi Germany and other occupied countries in the 9 months before the outbreak of WWII.  Arranged by British Jews and Quakers, the Kindertransport began on December 1, 1938, spurred on by the devastation of Kristallnacht on November 9, 1938 when Jewish stores, building and synagogues, as well as Jewish homes and schools were destroyed and 30,000 Jews were arrested and sent to concentration camps.

The first novel, Good-bye, Marianne, tells the story of Marianne Kohn, 11.  It begins on a day shortly after Kristallnacht, when she arrives at school dreading a math test, only to find herself locked out of the building with no explanation.  Her father, a book seller, has already disappeared and she and her mother don't know where he is.  They later find out that he was picked up on Kristallnacht and had escaped on his way to a concentration camp and has been living in hiding ever since.  Mrs. Kohn volunteers at an orphanage and one day tells Marianne that the orphans are being allowed to leave Germany and go to foster families in England.

Now that she isn't in school, Marianne becomes friends with Ernest, who is visiting the landlady of the Kohn's building with his mother, and who can't wait to be old enough to join the Hitler Youth.  Eventually, the Kohn's are told that Jews can no longer live in their apartment and must move out.

As luck would have it, one of the children is unable to travel with this first Kindertransport and Mrs. Kohn secures the spot for Marianne, who really doesn't want to go, but agrees to for her mother's sake.  Just as the train is leaving Berlin, Marianne is asked to look after a little girl.  Sophie Mandel, 7, and Marianne bond during the trip, but lose track of each other once they are in England and sent to different families.

Remember Me is the second novel and it follows Marianne's life as an refugee in England.  And life with the Abercrombie Jones' is anything but pleasant, despite their wealth.  Their goal for Marianne, whom they now call Mary Anne, is to become a servant once she turns 14.  She is given a cold room in the servants area and is expected to help out Gladys, their present servant, with various chores as part of her training.  Mrs. Abercrombie Jones criticizes everything about Marianne, even her German accent.  In addition, she has no regard for the fact that Marianne is Jewish and forces her to go to church and eat pork.

But at school, Marianne meets Bridget O'Malley and soon the girls are good friends and concocting a plan for bringing Marianne's parents to England, making flyers to slip under doors in the hope someone will need her mother's services.  Soon though, Bridget will be going to another school and the girls dread being separated, until some luck comes Marianne's way and she is offered a scholarship to the same school.

But Marianne and Bridget are finally separated when they are evacuated because of war.  Marianne is sent to Wales, where she is first placed in a Methodist home for unwed mothers.  But she is cast out when they discover she is Jewish.  Next, Marianne is sent to a family that has just lost a daughter and see Marianne as a replacement, even changing her name.  When their delusion is broken, they, too, turn on her.  Fortunately, Mr. Evans, in charge of billeting evacuees, likes Marianne very much, but he must find another place for her, which turns out to be a wonderful surprise for her.

Finding Sophie begins with Sophie Mandel, now 14 years old, filling in for the reader what had happened to her immediately after parting from Marianne in 1938, as well as recalling memories of her life in Germany before she left on the Kindertransport.  Lucky Sophie went to live with her mother's old friend, Aunt Em and was loved and well taken care throughout the war.  After 6 years living in England, Sophie has become fully assimilated to life there.

But now that the war is almost over, Sophie is afraid she will be sent back to live with her parents in Germany, whom she no longer thinks about very much, and realizes she doesn't even remember how to speak  German.  Now she must struggle with the guilt of not wanting to leave England and Aunt Em.

On VE day, May 8, 1945, as Sophie and her best friend Mandy wait in front of Buckingham Palace with thousands of other people waiting for the Royal family and Prime Minister Winston Churchill to come out, she notices a young nurse looking at her oddly and has a strange sensation she know the nurse.

In alternating chapters, the reader also catches up with Marianne, now a young women in nurses' training.  She also thought she recognized someone on VE day at Buckingham Palace.  As it turns out, Sophie is a Junior Red Cross volunteer at a hospital, and one Saturday, she is put on a different floor, where she and Marianne finally recognize each other.  Sophie has some difficult times ahead of her now that the war is over, and Marianne and her still best friend Bridget provide the understanding moral support young Sophie needs now.

These three interwoven stories give the reader such a good picture of what the Kindertransport was like for these young refugees.  Some were welcomed with open arms, others faced the same kind of racism and hate they had experienced in their homeland, still other, like Marianne, were seen a free labor.  All three stories are realistically and poignantly written.  Watts was part of the first Kindertransport at the same age as Sophie, and perhaps that is why she was able to capture so palpably the fear and reluctance   Marianne and Sophie felt leaving their homes and parents for the unknown.

Each of the books in Escape from Berlin were previously published as stand alone novels, but I think reading them together gives a much clearer, deeper appreciation of what Marianne and Sophie went through.  Finding Sophie is much more of a coming of age story than either Good-bye, Marianne and Remember Me because she is so young when she arrives in England and at just the right age of finding out who she really is when the war ends.

Escape from Berlin is a book that will appeal to anyone who like good historical fiction and I highly recommend it.