The Great Escape by Megan Rix 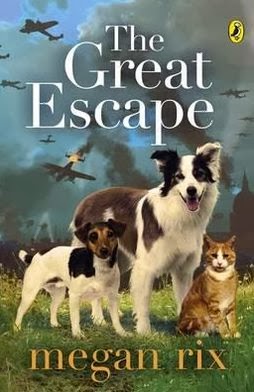 Robert Edwards, 12, and sister Lucy, 9, love their three pets - rambunctious Jack Russell terrier Buster, older, wiser sheepdog Rose, and Tiger, a marmalade cat who loves his creature comforts.  But now, it is September 1939, war has been declared and London might be unsafe once it really gets under way.   Mr. Edwards is a reconnaissance pilot for the RAF and Mrs. Edwards is a nurse on a floating hospital on the Thames.  And so, the children are to be evacuated to their grandmother's in Devon.  This is the farm where Rose used to herd sheep before the children's grandfather died suddenly and it is a place that Rose longs to return to.

But before Robert and Lucy travel to Devon, it is decided that neighbor Mrs. Harris will keep their pets for which she will receive some remuneration unbeknownst to her husband.  Trouble is, Mr. Harris doesn't like animals and resents the money needed to feed and care for the pets when he could be spending it in the pub.  And so, it is off to the animal shelter to have them put down behind his wife's back.

The line is long and before they get inside, the animals manage to escape from Mr. Harris and run away.  Now that they are on their own, where to go?  Rose seems to have an idea, but it is a long way home.

As the children settle in with the Fosters, Buster, Rose and Tiger begin their long trek across southern England in the direction of Devon.  Learning to work as a team, they manage to find enough to eat most of the time, but as the weather gets colder, the trip becomes harder and harder.  Along the way, each animal is caught and cared for by someone, until they decide it is time to rejoin their companions and resume their trip west.

Will the children and pets ever be safely and happily reunited?

The Great Escape is a heartwarming, exciting novel.  It is an adventure story about courage, survival and loyalty.  And not just the loyalty of pets to their owners, but of friends and family to each other and to their pets, as well.

The story reminded me somewhat of Robert Westall's book Blitzcat, about a black cat that goes looking for its true human, a pilot in the RAF during WW2.  But unlike Blitzcat, The Great Escape alternates between the animal's journey, the children struggling to adjust to new circumstances especially to their new school and their grandmother's increasing dementia, their friend Michael, who has been allowed to remain in London and help his father with his activities at NARPAC (National Air Raid Precautions Animals Committee) and who is frantic over the disappearance of his friend's pets.  Michael is also an animal lover and is upset at the growing number of pets that are not roaming the streets of London or being put down by people frightened by rumors that when the Nazis invade, they will infect the animals with rabies.

Part of Rix's purpose in The Great Escape is to make readers aware of the fate of these wartime animals.  She writes in her Afterword that over 400,000 cats and dogs are put down with only 4 days time at the start of the war.  Ironically, by Christmas, there was a shortage of dogs that could be trained for search and rescue purposes once bombing began.  You can guess that Rix is an animal lover in the same vein as Robert, Lucy and Michael.

The Great Escape is a perfect novel for any animal lover and perhaps an eye opener for those folks who might no love animals as much.

I have only come across one other story for young readers about NARPAC in WW2 and that was in an old Girl's Own Annual, Volume 62, published circa 1940 and called Nancy and NARPAC by Phyllis Matthewman.  If anyone knows of other NARPAC stories for young readers, I would appreciate hearing about it.