No Surrender Soldier by Christine Kohler 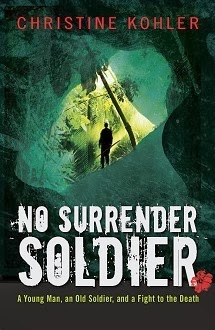 No long ago it was announced that the Japanese soldier Hiroo Onoda, who had hold out 29 years in the Philippine jungle, refusing to believe that WWII had ended and that Japan had lost the war, passed away at 91 years old.  But Onoda wasn't the only holdout.  Soichi Yokoi was stationed on Guam when the war ended, but he also refused to believe that Japan had lost the war and hid out in an dug out underground cave for 28 years.  He had refused to surrender, believing he has dishonored the Emperor.  He was discovered in 1972 while fishing in the Talofofo River by two hunters.

It is 1972 and Kiko Chargalauf, a 15 year old Charmorro boy who must suddenly deal with a lot of things in his life.  His older brother Sammy, who he has always looked up to, is off flying dangerous missions in Vietnam for the US Air Force; his parents have recently bought a tourist souvenir shop and must work long and hard to try and make a success of it; and his grandfather is slowly succumbing to Lytico-Bodig,    a disease occurring only in Guam, it is similar to Alzheimer's disease.  And on top of all these troubles, Kiko has a crush on a girl named Daphne, but is too scared to ask her out.

At the same time, not far from Kiko's home, a WWII Japanese soldier has been hiding out for 28 years, his body bent from living is a cramped underground cave.  Though he hates the idea of giving up, Isamu Seto wants to escape his cave, where he is haunted by the ghosts of his two fallen comrades and tries to comfort himself with childhood memories, though the voice of his father telling him he is weak and can't do anything right constantly intrudes on his thoughts.

When Kiko sees his grandfather attacking a Japanese man, he inadvertently learns that his mother had been raped by a Japanese soldier during WW2.  As Kiko's anger intensifies, Seto begins to make mistakes, leaving indications that he is hiding out in the jungle.  But though the Charmorro's are accustomed to finding "stragglers" there, Kiko becomes more suspicious and more interested than usual - providing a perfect opportunity for avenging his mother's rape.

In No Surrender Soldier, Christine Kohler has drawn from Yokoi's story to create an historical fiction  novel in which she manages to seamlessly blend fact and fiction, exploring the wide-ranging thoughts, feelings and emotions of both Kiko and Seto.  The chapter alternate between Kiko and Seto, with Kiko's told in the first person using internal and external dialogue to move his story along.  Seto's story is told in the third person, mostly using internal thoughts and memories.  But the form highlights their parallel doubts, fears and feeling of unworthiness.  I thought it was an interesting choice, but one that makes it definitely Kiko's story.  After all, it is an coming of age novel, though in an odd way, Seto also comes of age.

I found Kiko to be an engaging narrator and I think you will find him to be a very likable teen struggling with issues not so different from today's teens.  I found myself feeling pity and sadness for Seto for wasting 28 years of his life living in an underground tunnel so small, he couldn't even stand up.  I began to feel claustrophobic while reading Seto's chapters.  It wasn't to the point that I ever wanted to put the book down but I could palpably feel the cramped, narrowness of his entire life.

This is a debut YA novel for Kohler and she has clearly done some intensive research, not just about stragglers, but about life on Guam in 1972.  She portrays the culture and customs of the Charmorro people with sensitivity and thoughtfulness.  There is one rather graphic scene where Kiko and his grandfather slaughter a pig for a saint's day celebration, but raise pigs for food is/was part of the life of Charmorro people.

No Surrender Soldier is an unusual, compelling, well written novel that should resonate with today's young readers despite the historical setting.

This is book 3 of my 2014 Historical Fiction Reading Challenge hosted by Historical Tapestry
Posted by Alex at 1:30 AM