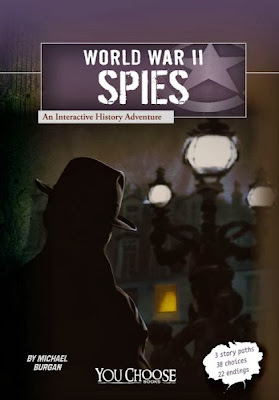 So far, I have reviewed two of these interactive adventures that are designed to give the reader a sense of what life was life during World War II.  The first book was World War II: On the Home Front by Martin Gitlin, in which you could choose three different stories to follow: a woman living in NYC, a 12 year old boy in San Francisco or a wounded African American soldier from the segregated south.  The second book, World War II Pilots also gives the readers a choice of three stories to follow: a British pilot in the RAF, an American pilot fighting in the Pacific, or a Tuskegee Airman.

Now comes yet another You Choose WWII adventure, World War II Spies.  The basic format is the same as the other two books.  It begins with a short introduction to why the war began, and begins to introduce the topic of the book, in this case it is spying and military intelligence gathering.  Then you are give three stories to follow: a college student who joins the resistance in Denmark after that country is invaded by Hitler in April 1940, an agent working for the German Abwehr (the Abwehr was the German intelligence organization), or an American OSS agent (Office of Strategic Services, also a wartime intelligence gathering organization).

As each story unfolds, you are asked to make more choices about what you want to do.  For example, the first choice the college student in Denmark must make is whether to stay in Copenhagen so he can also look after his family while serving the resistance or go to London and train to be an agent.  You follow each choice to its end, then you can go back, begin again and make different choices.  In all, you get 3 stories, 38 choices and 22 endings.  Trust me, it is not a complicated as it sounds.

I have really gotten to like these You Choose adventures.  Throughout your adventure, there are maps and lots of photographs relevant to the path of each adventure you are following.  And there is lots of back matter for anyone who wants to find out more.  And further suggestions for setting up your own wartime spy adventure.

I was particularly interested in World War II Spies because so many of the books I have written about here include spying and espionage tactics that were such a part of WWII in all its forms.

Like the other interactive history books, World War II Spies, will have lots of appeal to any reader interested in the war.  It would also be a wonderful supplement to a classroom or home schooling situation studying the war.

I should probably tell you that there are about 30 You Choose books from Capstone Press covering all periods in history, not just World War II.  I mention it in case you think the format is appealing, but are interested in another historical period.

A very informative leaflet about British spying and espionage in WWII can be found HERE courtesy of Craig Simpson, who writes exciting WWII books for kids age 12+

Nonfiction Monday is hosted this week by Abby the Librarian