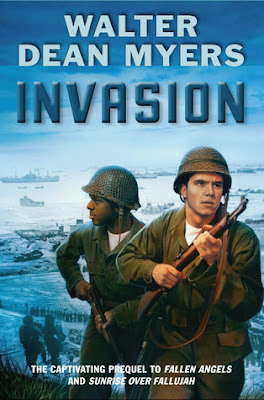 Invasion is Walter Dean Myers latest war novel.  It begins on May 14, 1944 as American troops are preparing for the D-Day invasion of France, which they know will happen but they don't know when.  It is narrated by the main character, Josiah "Woody" Wedgewood, who is with the 29th Infantry Division.  During practice, Woody runs into an old friend from home, Marcus Perry, an African American soldier in the all black Transportation Corps.

The story follows Woody before, during and after the invasion.  Throughout, Woody describes his feelings, his fearsand his loneliness.  These feelings finally prompt him to write home to a girl, Vernelle Ring, that he likes but who doesn't know it.

But the main part of the story is really about fighting to win back Europe from the Nazis and Woody provides some pretty graphic descriptions of what happens on a battlefield.  Walter Dean Myers does not romanticize the war nor does he spare the reader.  Invasion is rough, raw and detailed, as is some of the language used by the men.  According to his Author's Note, Myers wanted his readers to understand that the "...basic truth about war is that it is unbelievably brutal..."  He has certainly succeeded in that purpose.

I did have one problem with Invasion.  I found there was the real lack of camaraderie among the soldiers who formed the 29th Infantry Division.  It almost felt like they were each other's enemy.  Woody felt more like a distanced observer of his comrades, recording their behavior as an onlooker, not a participant.  Granted when men he knew were killed, he felt really felt the loss, but it was related more to his own fate than the fate of the dead soldier.

Marcus Perry, Woody's friend from back home in Virginia, appears briefly three times in this novel.  Naturally, because the Armed Forces were segregated in WWII, they couldn't serve together and probably wouldn't see each other very often, and, in reality, most likely never.  But Invasion is also a prequel to two of WDM's previous books about war.  Fallen Angels is about the Vietnam war, and focuses on Richard Perry, son of Marcus Perry.  Sunrise over Fallujah follows Robin Perry, nephew of Richard Perry, as he goes to war in Iraq following the September 11th attack on the US.

Invasion is a fast-paced novel, though some of Woody's detailed descriptions of unimportant things could have been edited down somewhat.  I never really connected with any of the characters, and really didn't feel there was much to Woody, and his comrades felt like shadowy figures.  I was sorry about this because I think WDM's message is important.  I suspect, however, readers will find this a much more exciting book than I did.  And I certainly think it is a worthwhile novel to read.

This book is recommended for readers age 12+
This book was an ARC received at BEA
Posted by Alex at 11:10 AM