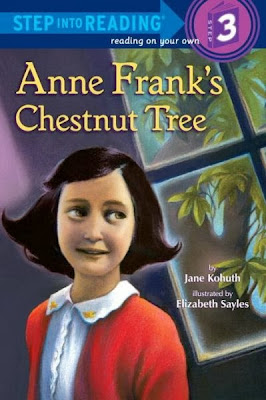 Anne Frank and her family went into hiding from the Nazis in Amsterdam on July 6, 1942,  until the morning of August 4, 1944 when they were taken into custody by the Nazis.  During the time she lived in the annex of her father's business building, she would escape the living quarters and go up to the attic to "get the stale air out of my lungs."  Outside the attic window was a large chestnut tree, a tree Anne refers to three times in her diary, on February 23, 1944, on April 23, 1944 and lastly on May 13, 1944 when she wrote in her diary:
"Our chestnut tree is in full bloom.  It's covered with leaves and is even more beautiful than last year."

Now, Jane Kohuth has written picture book for young readers that introduces them to this heroic girl and the chestnut tree that she loved so much.  Written in free verse, Jane Kohuth provides the reader with enough details of Anne's life as a child to give a sense of what her life had been like, and a brief explanation of why she and her family were forced into hiding in 1940.

The middle focus of the book is on Anne's life in hiding and the comfort she took in going up to the attic to look out of the window at the blue sky and the lovely chestnut tree that grew alongside the building she was in.  Jane Kohuth employs, in part, Anne's own words to accentuate the free verse used.  This section ends with the arrest of Anne and the other people in the attic.

The last part of the book focuses on the life and death of Anne's beloved chestnut tree.  The tree survived until 2010 when it was knocked down during a storm.  But, Kohuth, tells her reader that like Anne's words in her diary, her tree will live on even after its death.  Saplings from the tree were cut and are being planted around the world, 11 of which are or will be ceremoniously planted in the United States.

Anne Frank's Chestnut Tree is well written and would serve as a nice introduction to Anne's short, but heroic life.  It certainly captures Anne's feelings of hope and her appreciation of nature, as well as her deep belief in God.  In fact, it is quite well done for a leveled "Step into Reading" book that must be written to meet certain criteria.

In the case of Anne Frank's Chestnut Tree the leveled age range is designed readers who can read on their own in grades 1-3.  The problem is, of course, should a child that young be reading this book on their own, given the subject matter.  I can just imagine some of the questions that will arise from reading this book, the answers to which some children may not be ready to hear.  Personally, I would probably not give it to a child before third grade.  But that is a something parents and/or teachers would have to evaluate for themselves, based on what they think their children can handle.  Whatever they decide, this is a lovely book for introducing Anne Frank to kids.

The free verse is enhanced with appealing illustrations created by Elizabeth Sayles.  My only problem was that Anne looked a little younger in the first illustration than her actual 15 years.  Other than that, I found the illustrations and the text worked very well together in this newest book about Anne Frank.

This book is recommended for readers age 6+, but I would say more like 8+
This book was an E-F&G from Edelweiss


You can learn more about The Sapling Project HERE