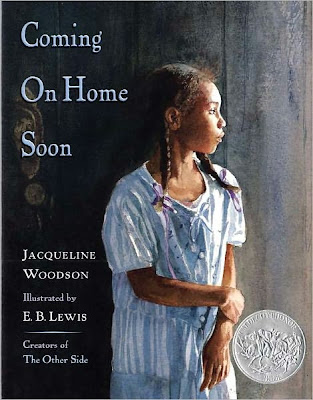 When Ada Ruth's Mama decides to go to Chicago to earn some money to send home, Ada Ruth must stay home with her Grandma.  Yet as the days pass, and no letter or money comes from Chicago, Ada Ruth misses her Mama more and more.  But Grandma reassures her that Mama with be coming on home soon and to just keep writing to her.

When Ada Ruth finds a kitten at the door one cold snowy morning, Grandma tells her she can't keep it,  there isn't enough food for themselves with the war going on. let alone a kitten.  But she lets Ada Ruth give her some milk anyway.

After a while, with no word from Mama, even Grandma feels like crying.

Day after day, Ada Ruth and her Grandma go about their lives, listening to the war news on the radio, hunting for food in the woods behind the house, always  followed by the kitten, and missing Mama and hoping for a letter.

Until, finally, one comes.  And sure enough, there's money and the news that Mama will really be coming on home soon.

In this gentle, yet powerful story Jacquelline Woodson has poignantly captured the fear, the worry and the loneliness of a young girl left behind when her mother must leave home for a job, a not uncommon occurrence in WWII.  The story is set in the middle of a very cold winter, metaphorically expressing the warmth that Ada Ruth associates with her mother and which is now missing from their home.  But, the soft warm of the kitten keeps the memory of her mother's warmth alive for Ada Ruth.  Their anticipated renion ends the story on a happy, hopeful note.

The text is completely supported by the realistic watercolor illustrations by E.B. Lewis, that are so expressive of the time and place that this story.  I loved Ada Ruth's saddle shoes, so popular at the time.  And the color palette used, in rich tones of browns, blues and icy whites, also reflects the sense of country living in the dead of winter.

Woodson has subtly given us a glimpse of one of the ways that the war effected the lives of African American woman and children on the home front in this story.  Ada Ruth's experience of the war was, unfortunately, not uncommon.  When men went to fight in WWII, it created a shortage of workers and opened opportunities for women to take over their jobs and earn better money than they normally would have been paid.  Here, Ada Ruth's Mama went to Chicago and worked for the railroad, washing train cars.  Pullman in Chicago had begun to hire black men in the 1930s, but by 1944, as the war went on, the company faced a shortage of workers and began to hire black woman as well.