An Elephant in the Garden by Michael Morpurgo, illustrated by Michael Foreman 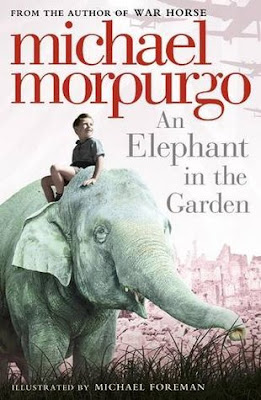 When 9 year old Karl is forced to go to work on weekends at a Canadian nursing home with his mother, a nurse, he finds himself drawn to an elderly patient name Lizzie.  And the attraction is mutual.  Karl is the only person there who believes Lizzie when she says that she once had an elephant in her garden.  Slowly, Lizzie tell her story to Karl and his mother.

Lizzie had lived with her mother, a zookeeper, and her young brother Karli in Dresden, Germany during World War II.  Though very much against Hitler, their dad is off fighting on the Russian front.  But when the Allies begin to bomb Germany, it is decided that the animals in the zoo would need to be put down if things got really dire.  Rather than see that happen, Lizzie's mother decides to bring a still young elephant home from the zoo and to care for her in the garden.  The elephant is named Marlene, after the famous German singer Marlene Dietrich, now living and working in America.  But in 1945, RAF planes literally firebomb Dresden, destroying most of the city center and causing residents to flee the city westward to avoid the Russian soldiers approaching from the east.  Among those refugees are Lizzie, Karli, their mother and Marlene.

It is mid-winter when the refugees head out with their pachyderm, hoping to find safety at the rural farm of some relatives who haven't spoken to Lizzie's family since the war began because they were Hitler supporters.  But when they arrive, the farm is almost completely deserted - in the barn they discover a wounded Canadian airman named Peter hiding out.  At first, their mother treats him terribly, but after he saves Karli's life, that changes.  And when the police show up at the farm looking for Peter, the family decides it is time to move on, west towards the Allies, with Peter, and of course, Marlene, who now carries 16 year old Lizzie's secret - she is madly in love with Peter.

As they head west again, the family has many more adventures and many more interesting encounters, but will they make it to safety with their elephant and their enemy soldier?

An Elephant in the Garden is based on a real story that Morpurgo and his wife heard on the BBC at 3 in the morning about a woman zookeeper in Belfast who took an elephant home each night with her When the Germans started bombing Ireland.  Naturally, Morpurgo gave the story his own special twist.  The result in an interesting narrative, though perhaps no one of his best.

Almost from the start, my interest flagged each time I picked up the book.  It was too slow moving and too full of explanation and short on action.  It did get better in the middle, after Peter was discovered and the family went on the run again, but I am afraid most young readers might have given up on the book by them.

I also found the idea that a modern listener is named Karl just like the Karli of the past, and that he resembles him in so many other ways, to be one of those coincidental conceits that Morpurgo so often uses and that I don't much care for.  It's a little to pat for my taste.

I did, however, like the metaphor of the compass - the one Peter carries as an airman and how it becomes a red thread through the story as a guide for finding one's way both physically and morally.

As always in a Morpurgo story, An Elephant in the Garden is told in simple, well-crafted prose.  The past and present settings are differentiated using different fonts to avoid any confusion.  And because it is by Michael Morpurgo, you know the end will be OK ever for the most sensitive reader, making it a good introductory narrative for kids who are just beginning to learn about war and its consequences.  And he does make Marlene sound like such a gentle, patient pachyderm, it almost makes you want to get an elephant of your own.  ALMOST being the operative word in that sentence.

Morpurgo has teamed up once again with Michael Foreman, one of my favorite children's book authors/illustrators, and the accompanying black and white ink and wash illustrations he has created for An Elephant in the Garden just complete the story perfectly.

And if you would like to read more about the real story that inspired Michael Morpurgo to write An Elephant in the Garden, you can find the story HERE
Posted by Alex at 9:50 AM