The Adventures of Superman: it's Man of Steel Day!

Today is Man of Steel Day because supposedly if you visit your local comic book retailer you can get a free copy of the All Star Superman @1 Special Edition comic book and maybe if you are lucky, free Man of Steel posters and bags.   It's all really just promo for the Man of Steel movie which opens on Friday.

This is a rather glamed up Superman and I know lots of people are looking forward to the new Man of Steel movie, including my own Kiddo.  But I'm just an old fashioned girl who still likes the old Superman comics books and newspaper strips.  Superman, as you probably know, was the brain child of Jerry Siegle and Joe Schuster in the 1930s.  In June 1938, Superman first appeared in Action Comics #1, and by 1939, the Man of Steel had his own comic book.  Once World War II broke out, it didn't take Superman long to become a hero and a defender to "truth, justice and the American way" for kids (and grownups) who were already hooked on both the comic book and the 15 minute radio show that aired almost everyday.

Superman ran as a serial on radio from February 12, 1940, syndicated on NYC's WOR, and later, it was on the Mutual Network, where it was broadcast from August 31, 1942 to February 4, 1949.  Called The Adventures of Superman, the 15 minute show usually ran late in the afternoon so kids could listen after school.  And kids loved it.

Superman is 75 years old now and over 1000 episodes of his radio show, The Adventures of Superman, is now in the public domain, which means you, too, can listen to this downloadable bit of pop culture history either on ITunes or the Internet Archive and best of all, it's all free.

Here, for your listening pleasure, is the very first episode called, appropriately enough, The Baby from Krypton.


And well, OK, I will probably go see the new movie Man of Steel, too.  Meanwhile, 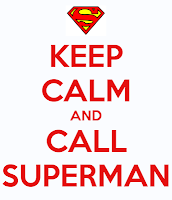