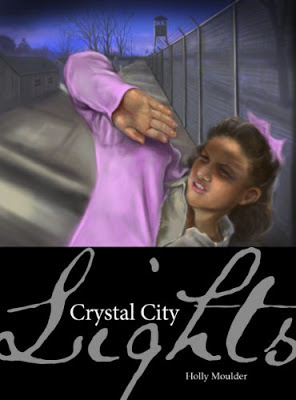 Internment camps in the US during WWII are usually associated with the detainment of Japanese Americans.  But they actually were not the only group to be classified as enemy aliens.  People who had been born in Germany or Italy were also sent to internment camps, despite having lived in the US for a considerable length of time and had strong ties to this country.  Often, they were sent to these camps based on very flimsy evidence.

Which is exactly what happens in Holly Moulder's novel Crystal City Lights.  Dottie Zorn, 12, has comfortably and happily lived her whole life with her parents and younger brother Burk in Audubon, NJ.  So when her best friend Liesel Siegfried says she is distressed about her father's support of Germany and then shows Dottie a pro-Hitler flyer she found in her house, Dottie knows she shouldn't keep it but instead she hides it in her closet.

After Liesel's father is taken into custody by the FBI, it isn't long before they show up at the Zorn's house and take Dottie's father into custody as well.  The next day while the family is out of the house, the FBI ransack their home, destroying loved family heirlooms and furnishings.  Still, the Zorns think they are OK, after all there is nothing about supporting the Nazis or Hitler in their home.  Except for that flyer, but Dottie is scared and keeps her mouth shut, hoping for the best.

The flyer is used against Mr. Zorn, and the family finds themselves traveling to the family internment camp in Crystal City, Texas carrying whatever they could in one suitcase each.

Now, instead of comfort, they live in a two room hut in a place surrounded by barbed wire and guarded by men carrying machine guns.   But Dottie makes the best of it and is happy to find her friend Liesel in a hut not far away.  Only now, Liesel must go to the German school instead of the American one because her father plans to take the family back to Germany.  And in fact, Mr. Siegfried even goes so far as to forbid Liesel from hanging out with Dottie.

To make matters worst, he has begun drinking all the time.  But where does he get the alcohol?  When Dottie discovers Mr. Siegfried's secret, once again, she keeps the information to herself.  And just like the flyer did, Dottie's silence again leads to trouble and this time, it might cost someone their life.

I came by Crystal City Lights at BEA this year and it was totally serendipitous.  I saw the sign as I was walking by the autographing area.  How I missed knowing that Holly Moulder's new book is beyond me, but I find that happens sometimes with BEA, no matter how careful I am.  So, I am so glad that the stars aligned at just the right moment for me to find this "killer diller" middle grade historical fiction story (killer diller is Burk's favorite expression).

This is a very nice coming of age story in which Dottie must learn the hard way and more than once that withholding information that her parents need to know can have serious consequences - it doesn't protect them or make bad things go away.

But Dottie also has the fierce loyalty of a girl her age to her best friend despite everything that happens.  And she loves to read - Nancy Drew, of course, gets packed in her single allowable suitcase.

Crystal City Lights is thought provoking middle grade historical fiction novel that not only provides a very readable story, but also gives the reader an inside look at a German internment camp and at the way German Americans were treated by others no matter how loyal they were to the United States.  It is a book that resonates even in today's world.


If you would like to have more information about the Crystal City Internment Camp that detained Germans, Italians and Japanese at the same time, though in separate areas, you can find it HERE