Hero on a Bicycle by Shirley Hughes 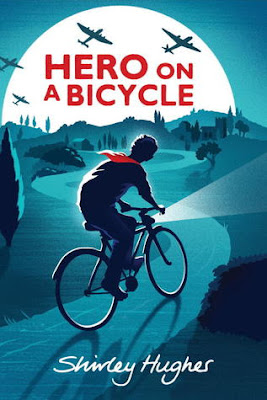 The events in Italy during WWII aren't often written about in kidlit.  To date, I have only written about two books where the action takes place in Italy.  The first was Stones in Water by Donna Jo Napoli, an MG story about an Italian boy rounded up in the cinema while watching an American cowboy movie and sent to work in a labor camp in Germany.  The second was the excellent picture book I Will Come Back for You by Marisabina Russo, about how a young Jewish girl and her family were helped to survive in hiding in Italy despite the strict anti-Semitic laws.

Well, now, thanks to the prolific British children's author Shirley Hughes, another story set in Italy had been told.  Hero on a Bicycle begins in 1944 in Florence.  Paolo Crivelli, 13, lives with his British mother Rosemary, older sister Constanza, 16, his now very old beloved dog Guido and his bicycle.  His Italian father is an outspoken anti-Fascist, forced into hiding so no one, not even his family, knows his whereabouts.

Now, with nothing to do since the schools are closed and his friends have all left Florence, Paolo sneaks out of the house every night and rides his bicycle around the city despite the curfew.  Meanwhile, his mother lies in bed worrying about whether he will make it home.

One night, Paolo is stopped by some rough looking men with rifles.  They have a message for his mother and want him to give it to her: they are in the area and will be getting in touch - tomorrow night if they can - the usual way.  The next night Paolo follows his mother as she heads to her meeting with the strangers.  As he watches, he realizes they are partisans and they want his mother to shelter two Allied airmen -a Brit and a Canadian - until they can get them to safety.

But there are rumors about Rosemary Crivelli and one Sunday, the Gestapo shows up and searches the house from top to bottom.  Luckily, the Crivelli's had a warning this was going to happen and were able to hide the airmen.  In fact, as the war in and around Florence heats up and the Allied forces get closer, the occupying German get more and more desperate and cruel.  And Paolo, who had earlier tried to join the partisans but was embarrassingly rejected, finally gets his wish do something for them when it is decided that he will be their guide to a safe house in the center of Florence.  But is a 13 year old boy up to the task of a grown man in order to save the lives of these two Allied airmen?

Hero on a Bicycle is a real coming of age novel, but I can't say it totally grabbed me.  I just didn't connect with any of the characters.  I actually found them to be flat. forced and quite frankly, unbelievable.    What was believable, however, were the descriptions of Florence and its surroundings, and the deprivations that the ordinary citizens suffered - for example, the Crivelli's were always hungry like everyone in WWII, while the best food went to the occupiers and it is interesting to read how careful Paolo was about protecting his bicycle tires, since there were no replacements if they got ruined.  Although, by 1944, I am surprised they were still OK given Paolo's heavy duty riding all the time.

And I am usually fond of books about partisans, but not this one.   I found Hughes' portrayal of them to be just plain of mean at time, especially towards a family and child of a man who is probably a fellow resistance fighter, as the family suspects he is.  And I thought they were a little to easy for Paolo to find, but not the Germans, which didn't make sense.

There are some pleasant surprises, though, and certainly some very heart-pounding moments, as when the German lieutenant, attracted to Constanza, finds a discarded Lucky Strike packet during his search of the house.  Or when Paolo must help the airmen and everything goes wrong.  This is a first novel for the 85 year old Hughes and I would still recommend Hero on a Bicycle in part because of its lovely Italian setting but with reservations as far as the plot goes.

A word about the illustrations at the head of every chapter:  Hughes is an artist and she had done these illustrations herself.  They are wonderful black and white pencil drawing, as you can see from this one of Paolo taking one of his nighttime excursions:

Be sure to check out the website dedicated to Hero on a Bicycle for more on this interesting novel, including some of the drawings she did during her post war trip to Italy and which she utilized for this novel.

This is book 7 of my 2013 Historical Fiction Reading Challenge hosted by Historical Tapestry.
Posted by Alex at 8:40 AM