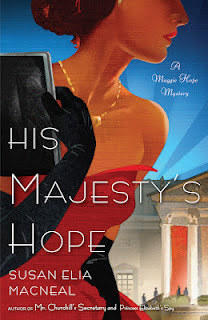 His Majesty's Hope is the third book in Susan Elia MacNeal's Maggie Hope Mystery Series.  Maggie, you will remember, is a Brit who was raised by her aunt in the United States after her parents died in an accident.  She went to England to sell her grandmother's house which she had inherited and ended up staying there once the war started in 1939.

In the first book, Mr. Churchill's Secretary, Maggie, who is a brilliant mathematician, found herself working for the PM and is soon caught up in solving the mystery of who and why his previous secretary was murdered - and it involves her own father, you know the one that is dead.

In the second book, Princess Elizabeth's Spy, Maggie is sent undercover to Windsor Castle under the guise of maths tutor to Princess Elizabeth.  But again finds herself in the midst of a murder mystery and lots of decoding of messages -and it involves her own mother, you know, the one that is dead.

In book three, Maggie has just finished training in Winston Churchill's elite SOE (Special Operations Executive) as a spy for Britain.  First off, she is to parachute into Germany to deliver some radio crystals to the Resistance in Berlin - in and out in three days time.  But when the opportunity comes along for a job as companion to the pregnant daughter of a high ranking Nazi, Gustav Oberg, Maggie jumps at the chance to perhaps uncover information that would be valuable to Britain's war effort.

But what she finds doesn't make sense until she gets friendly with Elise Hess, a nurse at Charité Hospital who has herself uncovered some disturbing information about what's happening to some of Germany's children.  And it doesn't take long for Maggie to find herself on the run from the Gestapo in Berlin.  And yes, this novel also involves family members and more, but that's all I can say without the need of a spoiler alert.

I loved the first two Maggie Hope mysteries and couldn't wait to get my hands on this one (I received an ARC from the publisher a while ago, read it immediately, and just reread it).  Macneal has really honed her skills as a historical mystery writer.  His Majesty's Hope is a taut, suspenseful story involving some disturbing programs that the Nazis had in place to secure their position as "Master Race." There is also just enough romance without over doing it.

Though His Majesty's Hope is a lot edgier than the first two books, I think it still retains its appeal to YA readers who enjoy mysteries.  You could, perhaps, say that this mystery is less of a cozy than the previous two because of some of the subject matter, but I certainly think it is still borderline cozy.  It isn't a classic murder mystery in the same way as the previous two books.

Maggie is becoming a character with a strong personality, though sometimes she can be a little petulant and willful, but that just makes her all the more realistic.  Still, I like that way she uses mathematics to solve many problems and this novel also involves a clever cipher that I found to be fun.

There is a subplot with Maggie's friend David, who is gay.  Being gay at that time was still illegal and in fact, Alan Turing, who broke the German Enigma Code that helped Britain so much in the war, was gay and was tried and convicted in 1952.  In 1954, he committed suicide using cyanide poison at age 42.  MacnNeal doesn't include a gay character because it is cute to do, but rather to point out the dangers for gay people at that time, when you would think more tolerance would be shown given what the Nazis were doing.

A word about the cover art - once again, it is great and feels so of the time.

So if you want a nice nail-biter of a mystery, give the Maggie Hope mysteries a try.  If you are already a fan of Maggie's than you are in luck - this novel will be available on May 14, 2013

I sure hope there is a fourth Maggie on the way!