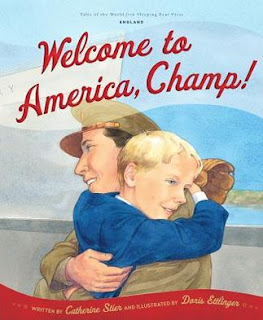 Once the United States entered WWII, the inevitable was bound to happen - American G.I.s who were stationed in England before deploying to combat areas would meet, date and fall in love with English girls.  And sometimes they got married.  Welcome to America, Champ! is the story of this very thing and what happens next, all told from the point of view of a young boy named Thomas.

Thomas begins his story in 1944, telling us about his mother marrying Jack Ricker, a US serviceman stationed in England.  It is one of the few happy occasions during Thomas's experience of war.  Before Jack, things were pretty sad for Thomas and his family, even though their village hadn't been bombed like other places in England.  His mother friends all put together their rations to make a cake for the bride and groom and there is lots of dancing at the small reception, but Thomas has lots of questions for his new dad about some day living in America, which his dad is happy to answer.  And he promises to teach Thomas how to play baseball with a stick once they are all together in the US.

But soon after Jack is sent off to war.  And eventually Thomas has a new baby brother named Ronnie.

One day, the church bells start ringing all over England to announce that the war is finally over.  But Jack is sent directly back to the states, with no time to visit his wife and sons.  The family waits until the finally get a letter from the army - be ready to sail to America in two weeks.

Pretty soon, Thomas, Ronnie and their mom are on the Queen Mary, sailing across the Atlantic to a
a new life.  Excited but apprehensive, Thomas reads the answers his dad had given him to all his questions over and over again to reassure himself that things will be work out.  And he spends lots time exploring the ship with his new friend Lucy, who is going to America for the same reason as Thomas.  Thomas and Lucy are both still rather homesick and anxious, but when they finally see the Statue of Liberty early one morning, Lucy's homesickness get the better of her and she begins to cry.

But maybe Thomas has just the thing to help Lucy with her fears and to help himself at the same time.

Welcome to America, Champ! is one of those very well written, well done picture books for older readers that are being published more and more lately.  I think these are perfect classroom books and offer a way of introducing different historical events to kids in first, second and third grades without overwhelming them with facts and figures.

I personally found this book to be very interesting for two reasons: first, because my best friend's grandmother was a war bride from England and because my dad had also immigrated here from Wales.  We both used love listening to their stories about leaving Britain and coming here.  And Welcome to America, Champ! is, after all, a story about immigrating to a new country and what that means to a child - getting to know a new dad, a new school, new friends, new way of life at the same time as leaving behind your old home, old friends, old school and your family.  Thomas's apprehension about these issues makes this a perfect read aloud for any child who is about to or has just dealt with a an event that has changed their lives.

Doris Ettlinger's beautifully rendered realistic watercolor illustrations complement and support this heartwarming story throughout, giving us a real sense of not just of Thomas's life but also his feelings and emotions.

My second reason for finding Welcome to America, Champ! is that I was fortunate enough to have sailed from Southampton to New York on the Queen Mary just before she was retired and I was old enough to remember it.  The Queen Mary was a lovely old ship and being on her was like stepping back in time (or at least that is what my memory tells me).

Be sure to read the Author's Note at the end of Welcome to America, Champ! for more information about war brides.

FYI: The Queen Mary, converted from a warship to a floating nursery, arrived in New York Harbor on February 10, 1946 with the first of the war brides and their children, all of whom were greeted by an army band playing Brahms' "Lullabye."  On board were 1,666 brides and 688 children.  What a day that must have been!

This book is recommended for readers age 6+
This book was purchased for my personal library.