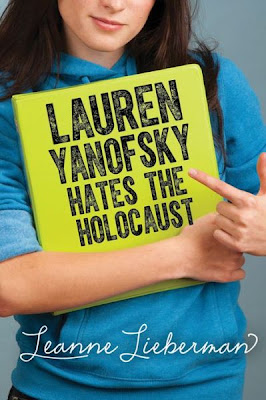 That is quite a title, isn't it.  I know I did a double take when I first saw it.  So, what kind of a kid would say she hates the Holocaust?  Meet Lauren Yanofsky.  Lauren is entering her junior year of high school, has a big crush on Jesse, a boy she has known most of her life, and is finding her best friend drifting away.

Oh, yes, and Lauren has also decided not to be Jewish anymore.  Lauren had always felt that her religion was full of persecution in the Bible and history.  Then, three years ago, she found out that her grandmother had eleven relatives who all perished in the Holocaust.  "Who needed all that misery?  Why would anyone want to belong to a religion that was all about loss, grief, and persecution?" she asked herself.  (pg13)

Lauren even managed to convince her parents, with the help of a hunger strike, to let her leave the Hebrew School she was attending in favor of public school.  But try as she might, Lauren just can't get away from Judaism and the Holocaust.  Her father is a Holocaust scholar at the University and he and her mother continually try to tempt Lauren back to her faith by joining a Jewish youth group, going a Taglit birth right trip to Israel and/or other religion-based  activities.  Lauren wants none of it, however.

As school begins, Lauren finds herself sitting beside her crush, Jesse, and her best friend, Brooke.  Things go well and it looks like Jesse may be more attracted to Lauren that just as a friend, and it also seems that Brooke is really supportive of this.  But Brooke has more than one surprise in store Lauren. where Jesse is concerned.  As the days pass, and their other two friends Chloe and Em become involved with the school production of Grease, and Brooke begins to drift off at lunchtime to hang outside with the Smokers, particularly with one named Chantel, Lauren finds herself alone in the lunchroom with her own thoughts.

One night, after getting together with Brooke, Chole and Em for pizza (just like the old days, Lauren thinks), they end the evening at the park, watching the boys from school, including Jesse, playing Nazi war games with water guns and paper armbands with Swastikas drawn on them.  The worse part is that everyone seems to think this is OK, except for Lauren.

When Lauren finds a lost Nazi armband after the boys finish playing their Nazi war game again, she finds herself in a dilemma: she knows the game is a form of anti-Semitism and that's unacceptable.  And she knows the right thing to do would be to turn them in at school, but Jesse is one of the players.  Now, Lauren must confront herself, her beliefs and her own ideas about the Holocaust and Judaism, again.

Narrated in the first person by Lauren, Lauren Yanofsky Hates the Holocaust is a realistic look at a teenager coming to grips with who she is as a person.  It is a coming of age novel that catches Lauren right in the transitional moment of time when she must make the choice about which way her moral compass is going to go.  And at the center of that choice is the Holocaust.  Reporting the boys, including Jesse, would mean taking a big risk, possibly losing friends, embracing her religion and accepting responsibility for her actions.  Not reporting them would make Lauren as guilty of anti-Semitism as her friends, of betraying her religion, its culture and most importantly, the 11 relatives and all the other people who perished in the Holocaust.  Lauren has a true moral dilemma to grapple with, but does get some surprising help along the way.

Lieberman has peopled her novel with all kinds of realistic characters, just the kind you would find in any high school, like the Perfects and the Smokers.  Lauren and her friends drink a little, curse a little, make out some and in general behave just like most teens do when adults are not around.  Besides moral choices, Lauren also deals with ordinary things like taming her very frizzy hair each morning even though her straightener is usually defeated by the damp weather.  She also has a younger brother Zach, who is studying to make his Bar Mitzvah, but whose sensory integration issues are making that difficult for him.  Without sinking into the stereotypical, the characters are all familiar to us but have their own individual quirks.

Lauren Yanofsky Hates the Holocaust will be available on April 1, 2013.

Email ThisBlogThis!Share to TwitterShare to FacebookShare to Pinterest
Labels: Coming of Age, Holocaust, YA