Last year, Tomie dePaola won The Society of Illustrators Lifetime Achievement Award and his extensive interview with Lee Wind on the SCBWI blog reminded me that I still haven't read Tomie's books about his home front experiences during World War II.  He wrote about them in the last four of the eight books that make up his 26 Fairmount Avenue series, subtitled The War Years.

In Book 5, Things Will Never Be the Same, begins in January 1941, first-grader Tomie had just received his two best Christmas presents - a Junior Flexible Flyer sled and a diary with a lock and key, and so Book 5 begins with his very first diary entry.  With all the charm, honesty and bluntness of a very precocious and artistic 6 year old, Tomie takes us through the year 1941, diary entry by diary entry.  Each chapter begins with a short diary entry and the rest of the chapter goes into more depth everything that was going on at the time.  And 1941 is an exciting year for Tomie.  Through his diary, Tomie presents a wonderful picture of what life was life in that year preceding America's entry into the war.  Things he writes about include the day to day family life of the dePaola family, and the world of a first grader, for example, learning about President Roosevelt and the March of Dimes, and not being able to swim in the summer because of a Polio scare; the excitement over seeing Disney's Fantasia in the theater, his disappointment over who is second grade teacher is, about his tap dancing lessons which he loves, and of course all the holidays over the course of the year.  But all this changes on December 7, 1941.  Tomie writes in his diary:

As the dePaola's listen, along with the whole country, to the radio announcer talking about the attack on Pearl Harbor, Tomie's mother says to her family, "Things will never be the same."

Unlike Things Will Never Be the Same, which covers a whole year, Book 6, I'm Still Scared, diary entries only cover one month, December 7, 1941 to December 31, 1941, but is is a powerful month for second grader Tomie.  Not quite understanding what has happened and the implications of war, Tomie is a scared little boy and to make matters worse, no one really wants to explain what's going on to him.  Luckily for him, after listening to Roosevelt's speech on the radio, the family go to visit Tomie's grandparents and his grandfather, Tom, takes some time he talk to him about his fears.  But life had indeed changed.  At school, there were air raid drills, and at home, an air raid shelter had to be created in the basement just in case.  And Tomie had to contend with being called the ENEMY because of his Italian heritage.  War was everywhere.  Even at the movies showing a children's feature, the newsreels showed London in the Blitz, and Tomie realized it was the first time he had seen what war was like.  At the end of December, young Tomie is still scared. 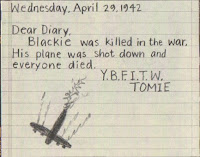 Book 7, Why?, begins on January 1, 1942 and runs until April 29, 1942.  In his new diary, Tomie gives more details of his day to day life.  He writes about his excitement about being able to stay up late for New Year's Eve, of going to help in his grandfather's grocery store, and of his first surprise air raid drill at school.  But his real trouble comes when his teacher starts teaching the kids to write in cursive and refused to allow Tomie, a lefty, to hold the pen in a way that worked for him.  And Tomie talks more about his older brother Buddy and how angry/annoyed Buddy gets with him.  But perhaps saddest of all are the entries about his cousin Anthony A/K/A Blackie.  Blackie was a favorite cousin who had joined the Army Air Corps.  Tomie seemed able to adjust to everything involving the war - like rationing and air raid drills - but the news of Blackie's death is just incomprehensible to him.  In the end, he is left asking himself Why?

Book 8, For the Duration, is the final book in the 26 Fairmount Avenue series and begins on May 1, 1942 and runs through... Well, that's hard to say.  It seems that early on, Tomie's diary key disappeared.  While there are not more diary entries, Tomie still talks about his life and in 1942, patriotism is in full swing.  At school, Tomie gets very sad and runs out of the room when the class starts singing the Army Air Corps anthem.  At dancing school. there is a lot so rehearsing for a wonderful recital, but there are also bullies in the schoolyard who take his new tap shoes and start tossing them around.  And there are victory gardens and ration books and helping again in his grandfather's grocery.  Things between Tomie and his brother Buddy get worse and in the end, it is Buddy who has taken the diary key.  But one thing Tomie learns to understand completely is that some things disappear (chewing gum, fireworks) and other thing come into being (war bonds, war stamps), all "for the duration."

The 26 Fairmount Avenue series is an extraordinary group of chapter books recalling Tomie dePaola's early life living in Meridan, Connecticut.  For the most part, they are a series of vignettes told in great detail and include whimsical illustrations by Tomie thoughout the books.   Much of what Tomie writes is funny, charming, sad and so typical of kids that age.  Though I haven't reviewed for first four books here, I would really recommend the whole series to anyone who is a Tomie dePaola fan.  My only gripe is that we are left hanging about Buddy and the diary key.