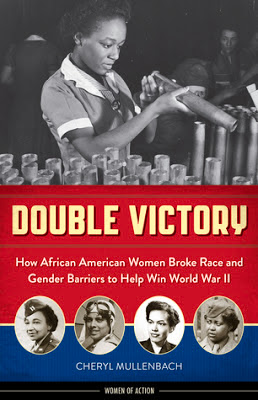 February is Black History Month and way back in 2011, I looked at a book about African American soldiers in World War II called The Double V Campaign: African Americans and World War II by Michael L. Cooper.  The Double V Campaign demanded that African Americans who were risking their lives fighting for freedom and democracy abroad should be given full civil rights at home - Victory at home AND abroad.   Cooper's book is an interesting, well-researched book, but it doesn't tell the whole story of the Double Victory Campaign.  The Double V campaign was also waged on the home front, and women played a very important part.

In her book, Double Victory: How African American Women Broke Race and Gender Barriers to Help Win World War II, Cheryl Mullenbach brings together the lives and work of a number of strong, brave women in four areas: women who worked in the war industry,  women who became political activists, women in the military, volunteers and of course, women in entertainment.

Here are only a few of the many stories covered in Mullenbach's book:
High school teacher Layle Lane was asked by A. Philip Randolph, a Civil Righs leader, to help organize a March on Washington in 1941 to end discrimination in employment, since most defense plants would not hire African Americans.  The march never happened, but Lane was in on the talks with President Roosevelt that led to the issuance of Executive Order Number 8802, which meant if you discriminate, the Fair Employment Practices Committee can investigate you.  It wasn't perfect, but it was a start.

Pauli Murray, a female law student, let students from Howard University in peaceful direct action sit-in at a restaurant that refused to serve African Americans.  Three by three the students entered, sat and asked for service.  When that was refused, they stayed seated and began to quietly study.  Police couldn't arrest them because by not being served, they weren't breaking the law.  The owner closed for the day, but when he reopened the next day, the students held a peaceful picket outside and after a few days of lost business, the Whites Only sign came down.

The women who joined the WAAC (Women's Army Auxiliary Corps) once it was opened to African Americans discovered the racism and segregation followed them into the military, just as it had followed men of color.  Nevertheless, the women soldered on and succeeded.  And eventually, Charity Adams even became the first African American woman officer in the WAACs and commanded the 6888th Central Postal Battalion (see Mare's War by Tanita Davis for an interesting and accurate fictional account of one women's experience in the 6888th).

Star power carries a lot of weight and in WWII it was not different.  When the Hollywood Victory Campaign was formed, actress Hattie McDaniel was asked to be in charge of "Negro talent" section.  Hattie, who had won an Academy Award in 1940 for playing Mammy in Gone with the Wind, helped to organize black entertainers to perform in the segregated all black units of the armed forces.  This work required the entertainers would need to meet frequently, usually at Hattie's house.  But she lived in a restricted area, meaning no blacks allowed.  So when the white homeowners filed a legal complaint, Hattie fought back and won.

Lena Horne, one of my favorite singers, was a favorite during the 1930s and 1940s and she was also part of the Hollywood Victory Campaign.  Mullenbach tells about the time on a southern USO tour, Lena performed one night to a white only audience, and the next morning in the mess hall, she was to perform for the black soldiers.  But in the front row were German POWs.   She left the stage, stood in front of the black soldiers, back to the Germans and sang.  She ended up quitting the USO tour over this, but continued entertaining soldiers throughout the war.

These are just a few of the many interesting women included in Double Victory: How African American Women Broke Race and Gender Barriers to Help Win World War II.  It is a well-researched, nicely presented book with lots of supporting photographs and detailed back matter.   It is intelligently written, yet very accessible for young readers.  The fact that she introduces us to ordinary women doing extraordinary things in wartime makes it all the more valuable.  And while it is good to know that anyone can make a difference, not just famous people, it is also nice to read about the contributions of so many African American women, which are often overlooked.

For more on the Double Victory Campaign, see Newspapers - The Pittsburgh Courier and
Fighting For Democracy - African Americans