Ten-year-old Auggie Pullman, who was born with extreme facial abnormalities and was not expected to survive,  goes from being home-schooled to entering fifth grade at a private middle school in Manhattan, which entails enduring the taunting and fear of his classmates as he struggles to be seen as just another student. 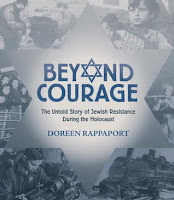 2013 Flora Stieglizt Straus Award (Non-Fiction)
Beyond Courage: The Untold Story of Jewish Resistance During the Holocaust by Doreen Rappaport

Twenty-one brilliantly detailed accounts illuminates the defiance of tens of thousands of Jews across eleven Nazi-occupied countries during Word War II. In answer to genocidal madness that was Hitler's Holocaust, the only response they could abide was resistance, and their greatest weapons were courage, ingenuity, the will to survive and the resolve to save others or to die trying. 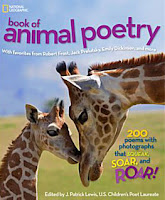 Beautiful photography compliments and extends the 200 enchanting poems about animals written by some of your favorite poets, such as Robert Frost, Emily Dickinson, Carl Sandburg, our old favorite Anonymous, even Vita Sackville West (who knew!) and of course, our Children's Poet Laureate and editor of this lovely volume, J Patrick Lewis.

Congratulations to the winners!

This post was originally published on my other blog Randomly Reading so if you receive this twice, my apologies.
Posted by Alex at 10:08 AM