From the Archives #22: The Long Way Home by Margot Benary-Isbert 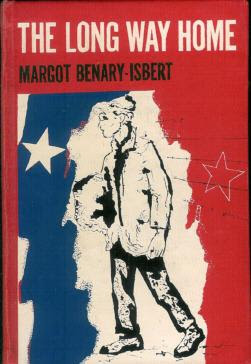 It's 1945, World War II has just ended, Germany is in chaos and retired schoolteacher Sabine Quendlein has discovered a small sickly boy left in her garden by a desperate mother and former student who wasn't able to take care of him.  Trying desperately to nurse him back to health, nothing in her poor stock of food helps, until an American soldier shows up at the door.  Larry Sherman takes a real interest in the boy, Christoph, and the teacher.  He brings them a steady supply of American rations smuggled from the Army, and finally Chirstoph begins to thrive.

But then Larry has to leave.  Sabine Quendlein's house is located in eastern Germany and as per the agreement at the Yalta Conference, she now lives under Soviet rule.  But Larry promises her that as soon as possbile, he will send for Christoph to come live with him and his new French wife, Denise, in Chicago.

This promise has to be continously postponed because Denise is having emotional problems adjusting to her new life in the US.  Then, in 1953, at age 13, Christoph begins to get involved with some dangerous political stuff.  Many of the young people living in the Eastern Zone of Germany were tired of Soviet oppression and groups of student Freedom Fighter were organized.  The village's mayor, another former student, visits Miss Quendlein and tells her about Christoph's activities and warms that the authorities are on to him.  And so it is decided, Christoph must sneak over the border into the Western Zone and travel to America.

Christoph unwillingly bids farewell to his Aunt Sabine and sets off on foot for the first leg of his long journey to Chicago.  This journey includes his escape under the barbed wire border fence, a slippery climb down a rock quarry on the other side in pouring rain, where he received a serious injury resulting in a scar down the side of his face, a stay at a castle full of actors and actresses, a stay with some Quaker relatives of Aunt Sabine's, an ocean crossing in a ship, a stay with a Quaker family in New York, and finally a train ride to Chicago.

In Chicago, Denise is still haveing adjustment troubles, made all the more difficult by the two adopted war orphans and the one natural child she and Larry have and for whom she can't manage to properly care.  Larry arranges for Christoph to live with a family he knows who own a restaurant, and where he can work evenings as a dishwasher, along with the owner's children.

As he travels from East Germany to Chicago and beyond, Christoph has many adventures and discovers many new things, some of which amaze him, some of which confuse him.  But as she always does, Benary-Isbert mixes a certain kind of innocent, almost ideological and really sentimental view of the world with harsh, sometimes jolting reality.  And again, as with The Ark and Rowan Farm, it results in a story that you really like and that makes you think.

It seems that a trademark of Benary-Isbert's writing is to provide lots of small, everyday details about her characters, the lives they have and the circumstances under which they live.  In The Long Way Home, this results in an clear, realistic picture of post-war life, not just in Germany, but in the US as well, something most readers might not remember or even know about, and bringing it all to life once again.  Young readers weren't even alive when the fall of communism in East Germany and the dismantling of the wall that separated east and west became history on November 9, 1989.

And I had to laugh out loud when I read the following passage and thought to myself Plus ça change, plus c'est la même chose (the more things change, the more they remain the same):


"The boys looked sloppy.  It seemed to be the fashion for them to wear their jeans so low on their hips that a patch of skin on their backs appeared when they stooped." (pg 122)

The Long Way Home was published in 1959.

I so thoroughly enjoyed reading this book and really appreciated how Benary-Isbert ever so causaly let readers of The Ark and Rowan Farm know what became of the characters in those novels.

This book is recommended for readers age 11+
This book was borrowed from a friend
Originally written in German, this book was translated by Richard and Clara Winston.

Email ThisBlogThis!Share to TwitterShare to FacebookShare to Pinterest
Labels: From the Archives, Germany, Post WW II, YA