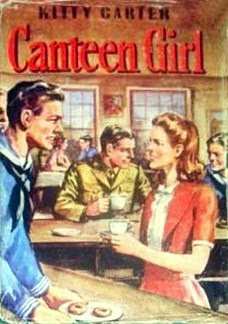 Last year, I reviewed Pamela G by Florence Gunby Hadath about a English schoolgirl, her friends and the mobile canteen they drive around the countryside providing hot tea, sandwiches biscuits and whatever else was needed by the soldiers who were practicing maneuvers in the area before shipping out.

Once the US entered WWII, canteens were set up all over the country to do basically the same thing - provide coffee, sandwiches and, of course, the famous Red Cross donuts.  Working in the canteen was one of the ways that girls and women could do their bit for the war.  And that is exactly was Kitty Carter discovers when she meet a handsome young sailor, Brad Mason, at a Community Chest drive picnic on Palmetto Island in the beginning of Kitty Carter, Canteen Girl.

Kitty had wanted to join the WAVES, but if she did there would be no one to look at her brother Billy, 6, not with her father in the Navy and her mother already dead.  Canteen service, Brad explains, is perfect for just that kind of situation.  It is what his younger sister is doing while in junior college.  He immediately introduces Kitty Mrs. Pearson, in charge of canteen training and luckily, a new class is starting at the beginning of the next week.

No sooner does Kitty finished her weeks long Red Cross training and she is thrown into an emergency.  A big fire at the island's fish cannery and lots of now homeless people to care for.  But both Kitty and Brad think this was not an accidental fire and they decide to investigate.  After all, someone saw a dark figure running away from the scene the same night that Kitty and Brad witnessed a sailor's shoe spontaneously catch fire from a stray cigar ash, as though it has accelerants on it.

More strange events follow on the heels of this, and before long Kitty and Brad are totally convinced that there is something going on that involves some of the Navy people working in the Naval hospital on the island.  This also happens to be where Kitty's father is stationed as the hospital's Chief Pharmacist's Mate.  The hospital is the center of life on the island.

Naturally, Kitty's canteen duties help advance the investigation, even if they don't know what they are looking for exactly.  But Kitty's suspicions increase when she notices an officer playing chess with enlisted men - rank is important in the Navy and this just isn't done.

Eventually, Brad and Kitty begin to suspect that someone is sneaking supplies to German submarines not far from shore when bread from a local bakery is found in a captured sub.  This suspicion is reinforced when they take Billy in a picnic to Terrapin Island and he finds a constructed lookout in the tallest tree facing the ocean.

Later, the plot thickens even more when a troop train passes through while Kitty is on canteen duty.  A soldier wants to know if anyone knows Terrapin Island and Kitty responds yes.  He has money from the island's owner for the 100 year old black man, Uncle Mose, who has been living there his entire life, having been born there when the large island home was a plantation.  Kitty gets the owner's name and address, so she can write and tell him that Uncle Mose has been moved to a dreadful hut on the island after the owner rented the island to a Mr. Beeson, a very nasty piece of work, instead of the nice home he was supposed to be living in.

Things are almost put on hold when Billy gets seriously ill, but when she confesses her suspicions to her father at Billy's bedside and mentions Beeson, who comes to the hospital to pick up food scraps for his pigs, her dad thinks she may actually be on to something.  Mind you, she and Brad still don't know what they are investigating.

Well, one hurricane later and the mystery is solved.  It seems the chess playing officer was playing chess to keep the Chief Commissary Steward (or cook) away from the hospital kitchen.  That way, an enlisted sailor name Punaro could sneak supplies, food and medical items, out to Beeson, on the excuse of picking up his,, pig food.  Beeson would take the supplies to Terrapin Island and watch for the Nazi subs.  And it turns out that Kitty's father is actually stationed there to investigate this mystery of the disappearing supplies, as is a Nurse Dawson, whose brother had left the post of Chief Pharmacist's Mate in disgrace when he was supposedly unable to find out who was behind the thefts.

Not only does everything end well, but love is in the air, too.   Mr. Carter and Nurse Dawson become more than just colleagues, they were planning on getting married.  And of course, that is what is implied about Brad and Kitty.

Kitty Carter, Canteen Girl was a lot of fun to read because it was the same kind of benign mystery that you find in Nancy Drew books, where no ones life is ever in real danger, but there is enough excitement to hold you attention.  And despite it focusing on the mystery, there is a lot of information about what it was like to be a canteen girl.  It must have been a very welcoming sight to members of the armed forces to be greeted at every train stop with hot coffee and fresh food.  And to know that their USOs would always be a welcome respite for them.

Kitty Carter, Canteen Girl was part of a series of eight book published around 1943/44 by Whitman Publishing Company as part of their "Fighters for Freedom" series.  The writing in these novels is far from wonderful and the plots tend to be a little thin, but their real purpose was, of course, as propaganda pieces.  Still,  they are worth reading even now if only to see how a wartime mentality was created and maintained for boys and girls in WWII.

On the other hand, the Red Cross still does the important work of helping people whenever they are needed.

Email ThisBlogThis!Share to TwitterShare to FacebookShare to Pinterest
Labels: Family, Friendship, From the Archives, Mystery, YA