I Will Come Back For You: a family in hiding during World War II by Marisabina Russo 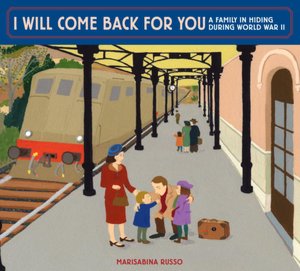 I Will Come Back for You is one of the books that came out recently and was so highly recommended by reviewers.  It is a fictionalized story about Marisabina Russo’s real life Jewish family living in during the Second World War.  The experience of Jews at that time and place is not the subject of many children’s books and so this is a welcome addition to the Holocaust body of work.
Everyday Nonna (Grandmother) changes her jewelry with the exception of her charm bracelet.  Like most charm bracelets, each charm represents one important aspect of Nonna’s life. The bracelet and the charms had been a gift from her daughter and prove to be an interesting way to talk about what happened to Nonna’s family during the war.
One day, while looking at the charms, her granddaughter expresses an interest in hearing the story behind each one – a donkey, a piano, a bicycle, a piglet, a barn, a spinning wheel and a ship – that hang on it.
Charm by charm Nonna’s story unfolds beginning with what life was life for her affluent Jewish family in .  These were happy, busy times for the children. But one day things changed and anti-Jewish laws were passed, just as they had been in .  Jews were no longer allowed to do the things they used to do or to go to places they had always enjoyed visiting after aligned herself with Nazi Germany.
Under these laws, Nonna’s papa was ordered to an internment camp, because he was a foreign born Jew.  But the family could visit every weekend, staying with a kind family in the village.
As Nonna continues her story, charm by charm, she tells her granddaughter of the sad events surrounding her papa and how the family had to go into hiding themselves, and how, with the help of some very kind people they stayed safe until they were able to immigrate to the after the war ended.
This is a wonderful book for introducing young readers to one aspect of the Holocaust without being terribly frightening.  It is told in simple, straightforward language enhanced by simple but effective illustrations.  No illustrator is listed; however, the rather flat folk art type illustrations are done in watercolors.
Russo has also included photographs of her own family in the endpapers from the 1930s and 1940s, and, in an afterward, she briefly tells the real story of her family, giving the fictionalized version of events its base in reality.  There is also a glossary for both Italian and English words to help understand some of the words and concepts used.
This book is recommended for readers age 5-9
This book was borrowed from the Webster Branch of the NYPL
Book Trailer:

I Will Come Back For You: a family in hiding during World War II
Marisabina Russo
Schwartz & Wade
2011
40 Pages
Posted by Alex Baugh at 9:17 AM